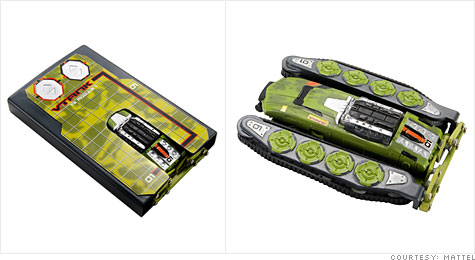 NEW YORK (CNNMoney.com) -- It's the size of a credit card and about as slim as a cell phone. But the coolest feature of Mattel's new Hot Wheels ride is its 3D action: Push a button and the "flat" car pops up into a remote-control vehicle.

Called "Stealth Rides," these toy cars are Mattel's first-ever folding Hot Wheels. It's the latest innovation for a brand that's been selling in toy stores for more than 40 years.

"This is definitely one the coolest new toys in 2010," said Jim Silver, a toy industry analyst and editor in chief of TimetoPlayMag.com.

Mattel (MAT, Fortune 500) has created five different models of Stealth Riders, including two cars, two tanks and a "Batmobile Tumbler" that the toymaker will debut next month during the Toy Fair in New York.

The annual industry event showcases some of the hottest new toys that will hit stores later in the year, in time for the Christmas shopping season.

All five Stealth Rides fold flat and slide out of a plastic case that functions as both a carrying case and a remote control. With the push of a button, the "flat" cars transform into three-dimensional, fully functioning remote-control vehicles.

"Containing a fully functioning vehicle in a pocket-sized case will allow kids to play anywhere, anytime," said Geoff Walker, senior vice president with Mattel Brands. "The vehicles [provide] a unique and cool level of play experience that was not previously possible."

The Hot Wheels Stealth Rides will hit stores in August, priced at about $25 per car.

"The remote control category [of toys] used to include big toys for $70 or more," said Silver. "So this is an affordable price point for a very cool product that's never been done before."

He also praised the cars' engineering. "These [cars] are easy to carry around and the charge time is fantastic," Silver said. "It's 30 minutes of play, and that's a long time for such a small remote-control toy."