How Obama got Keynes wrong 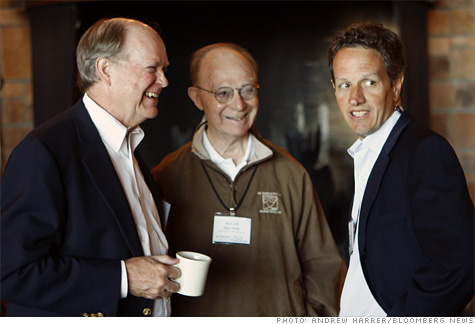 NEW YORK (Fortune) -- The Obama White House likes to say that the theories of John Maynard Keynes form the foundation for its fiscal policies. Most notably, it draws upon the legendary British economist's idea of spending big to pull out of a recession.

But one economist says the administration has gotten Keynes only half right. Allan Meltzer of Carnegie Mellon is one of the most influential monetarists of the past 50 years. He has served in the Department of the Treasury under President Kennedy and on the Council of Economic Advisors during the Reagan Administration. He also authored the book, Keynes's Monetary Theory: A Different Interpretation.

While the Obama team is laying out huge sums of money, Meltzer says it's neglecting a key part of Keynes' plan: You can't run up a debt without a way to cover it.

Meltzer recently sat down with Fortune editor-at-large Shawn Tully. Below are edited excerpts from their conversation.

If Keynes were alive today, what would he think of President Obama's fiscal policies?

He would roll over in his grave if he could see the things being done in his name. Keynes was opposed to large structural deficits. He thought that they chilled rather than stimulated the economy. It's true that we're stuck with large deficits now. The goal should be to reduce them, not to take on new spending that makes them worse.

Today, deficits are getting bigger and bigger with no plan to significantly lower them. Keynes understood what the current administration doesn't understand that the proper policy in a democracy recognizes that today's increase in debt must be paid in the future.

We paid down wartime deficits. Now we have continuous deficits. We used to have a rule people believed in, balanced budgets. And now that's gone.

Keynes wanted deficits to be cyclical and temporary. He wouldn't have been in favor of efforts to raise tax rates in a recession to eliminate deficits. He viewed that as suicidal. He was opposed to the idea that governments should balance the budget during a downturn, and advocated running short-term deficits to spur the economy.

The type of stimulus he advocated was very specific. He said it should be geared towards increasing private investment. He viewed private investment, as opposed to big government spending, as the source of durable job creation. He also said that the deficits should be self-liquidating, so that the increased economic activity caused by the stimulus inevitably generated a combination of extra tax revenues and lower unemployment payments. With higher revenues and lower outlays, the deficit would disappear.

The Obama administration's main objective, in the name of Keynes, is boosting consumption. That sounds very different from the focus on investment that you say Keynes advocated.

Keynes didn't favor at any time that I know spending to increase consumption. He didn't want that, and in fact he believed that was taken care of by the marketplace.

What specific policies did Keynes advocate for smoothing investment?

Keynes is very vague on the subject. He believed that the government should plan and direct investment, but not nationalize it. He talked about how well utilities were run under state regulation in Britain. Keynes wanted to apply that model to more of the economy. He thought government planning of investment was the best way to reduce risk for private companies and lower interest rates to spur investment.

Did Keynes champion tax cuts or government spending increases in a recession?

Again, he was extremely vague. On spending, he did say that deficits should be temporary and self-liquidating. He clearly did not advocate long-term spending in excess of revenues, since that causes structural deficits. Nor did he specifically recommend tax reductions for individuals or companies. Those types of cuts, however, are an obvious way to achieve his goal of boosting investment in a recession. And it's been used with great success by his Keynesian disciples. For example, the Kennedy Administration tax cuts were championed by Keynesian economists, and proved very successful at raising investment.

And one of the leading Keynesians, Franco Modigliani, developed a theory of consumption stating that temporary tax cuts are mainly saved or used to reduce debt. Milton Friedman, the ultimate champion of free markets, independently developed an alternative model that came to the same conclusion. The temporary reductions under Carter, George W. Bush and Obama were all failures, since people spend more only when they're confident their take home pay will rise permanently.

This is standard economic theory that the current administration ignores.

What would Keynes think of Obama's stimulus plan?

It's unbelievable that a man whose main theme was to smooth investment comes to be the proponent of redistributing income away from the people and companies who do the investing.

My advice on the stimulus plan was, don't do it. Let's look at the plan. First, a lot of the money was used to reduce the deficits of state and local governments by increasing the federal debt. It was simply money transferred from the federal government. The economic multiplier effect was zero. Second, the temporary tax cuts went to paying off credit cards and other debts, not spending that would have increased economic growth.