Toyota trouble round-up: What to do now 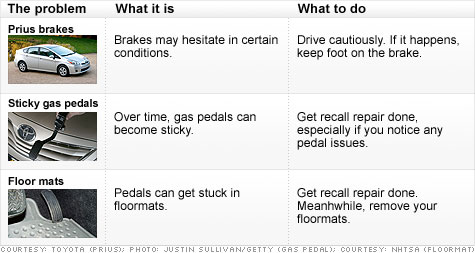 NEW YORK (CNNMoney.com) -- Problems with Toyota cars are cropping up faster than the automaker can deal with them. Following two different recalls for problems involving accelerator pedals on various models comes the revelation of braking problems in the iconic Prius.

Here's a rundown of the problems, the cars involved and what to do if your car's caught up in any of this.

What's the problem? Under certain conditions, particularly at relatively low speeds when traveling over rough or potholed roads, drivers have complained of a brief, but significant, delay in brake performance.

Is it being blamed for crashes? Yes, at least four crashes in the U.S. have been reported, allegedly as a result of this problem.

What cars are involved? 2010 model year Toyota Priuses made before January, 2010. Toyota is also investigating whether the Lexus HS250h hybrid, which shares its mechanical parts with the Toyota Prius, might have a similar problem.

Is there a recall? No, at least not yet.

Is there a fix for it? None has been announced yet, but Toyota has fixed the problem on cars coming off the assembly, so there does seem to be some sort of solution. Now Toyota has to figure out how to get that change made to cars already on the road.

What should I do? The safest thing to do, of course, would be not to drive the car until the problem has been fixed. If you do drive, be aware of the problem and allow extra following distance and be begin to stop a little sooner for red lights and stop signs, especially if the road is choppy.

David Champion, Consumer Reports' head of auto testing, also reminds drivers not to lift off the brake pedal if they feel a loss of power. Instead, keep your foot pressed down hard on the brake pedal and don't pump the brakes.

What's the problem? Over time, gas pedals in some cars become sticky. At first, they just become a little harder to push down and when you lift your foot off the gas, they're slower to come back up. In the worst case, the pedal on these cars can become stuck part way down.

Is it being blamed for crashes? There have been no crashes or injuries reported as a result of this problem.

Is there a fix for it? Yes. Toyota dealers can install a small metal plate that reduces wear on the plastic parts involved.

What should I do? Get your car fixed as soon as you can. If your gas pedal starts to feel sticky, stop driving immediately, Toyota says. Pull over in a safe place, then call a dealer.

If the pedal becomes stuck part way down, applying the brakes should be enough to slow the car and bring it under control. Don't pump the brakes, though. That will just weaken your power brakes. Instead, press and hold the brakes. Also, at the same time, you can shift the transmission into neutral, which will stop the engine from driving the wheels.

Keep in mind that these situations are rare occurrences.

What's the problem? In some cars, gas pedals can become stuck on the edge of afloor mat, particularly when thick all-weather floor mats are used or when floor mats are stacked on top of one another. In this case, the pedal can be stuck almost all the way to the floor, creating a particularly dangerous situation.

Is it being blamed for crashes? Yes, there have been crashes and some deaths on account of this problem.

Is there a recall? Yes 5.3 million vehicles have been recalled for floor mats.

Is there a fix for it? Yes. Dealers will alter the shape of the gas pedal to prevent it becoming stuck on the floor mat even when thick or stacked floor mats are used. In some cars, the floor area under the gas pedal may also be reshaped slightly to make more room.

What should I do? Get your car fixed as soon as possible. If your car hasn't been fixed yet remove your floor mats.

If your gas pedal becomes stuck in the "floored" position, immediately shift the transmission to "Neutral" and press hard on the brake pedal. Don't pump the brakes but apply even, firm pressure.

Toyota: Apology but no new recall

How did Toyota get here?