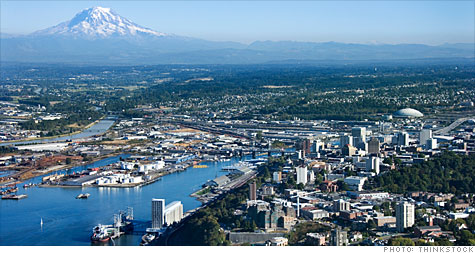 Where are the best bets for recovery? Tacoma, Wash., tops the rebound list.By Les Christie, staff writerFebruary 25, 2010: 10:08 AM ET

NEW YORK (CNNMoney.com) -- Despite signs that the real estate market might be lurching forward, prices are expected to fall further this year and next.

The average home price in the United States will fall by about 6% by September 2011, according to a joint report between Fiserv and Moody's Economy.com. And that's after plunging more than 27% in the past three years.

Most of the projected home price decline will occur during the usually slow summer months of 2010. After that, prices should begin to stabilize, according to Fiserv, and stay almost flat through fall of 2011.

The main reason for continued decline, according to Mark Zandi, economist and co-founder of Economy.com, is foreclosures -- the same thing that's plagued markets for the past three years.

"Foreclosure sales will pick up this spring as mortgage servicers figure out who can qualify for a modification and who can't," said Zandi.

He figures there are at least 4.5 million mortgage loans either in foreclosure or clearly headed in that direction. When that additional inventory hits the market, it will provide numerous choices for buyers and encourage sellers to drop their listing prices.

Check the home price forecast in your city

The end of two federal programs, which have been propping up markets, will also tamp down prices.

The Federal Reserve has been purchasing mortgage-backed securities since early 2009, scooping up as much as $1.25 trillion worth. That has dampened rate increases by providing a ready market for the securities. But the Fed's program lapses on March 31, when it cedes the playing field to private investors, who will almost surely demand higher rates.

Any resulting rise in rates will cause some buyers to withdraw from the market and others to look for lower priced homes. Either way, demand for homes drops and so do prices.

A month after the Fed bows out of the mortgage-buying market, the homebuyer tax credit will start to expire. To qualify for the $8,000 credit, homebuyers must sign a contract before April 30 and close by June 30. When the first date passes, many buyers are expected to vacate the market, weakening the demand for homes.

Worst of the worst

The worst performing market will be Miami, Fla. Moody's projects prices there to drop a heart-stopping 29.2% by Sept. 30. That follows a 47.7% decline the metro area recorded in the past three years. Grand total: 64% drop.

Other disastrous performances will be turned in by the Hanford, Calif., metro area, where prices are projected to plummet 27.2% through Sept. 30, 2010 following their 36.9% drop for the previous 36 months. Ft. Lauderdale and West Palm will also register steep drops.

There's some good price news coming out of California's Central Valley for a change; prices will begin to emerge from their free fall toward the end of this year.

Foreclosure: Where does your state rank
First Published: February 25, 2010: 6:32 AM ET
Find homes for sale