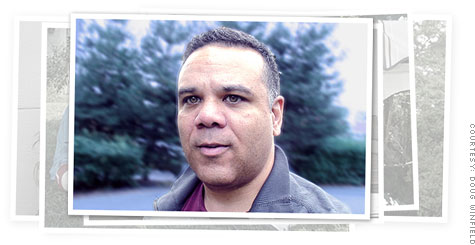 NEW YORK (CNNMoney.com) -- Standing out in a sea of job seekers can seem nearly impossible in this economy -- unless you craft a unique approach that potential employers can't help but notice.

That's the strategy that worked for Doug Winfield. When the Boston-native moved to Seattle for a job at a public relations firm, he never anticipated it would be so short lived. But after less than two years with the company, drastic cutbacks left Winfield, 47, out in the cold last year.

The former vice president of digital strategies started applying to jobs and calling on contacts, but as the local corporate giant, Microsoft, also started cutting back, the entire job market for digital media in Seattle was hurting, he said.

Winfield both broadened his search to other agencies in New York, San Francisco and Boston and refined it within his own community. "In addition to making phone calls and sending out résumés, I got involved in the Social Media Club of Seattle," he said. "I found like-minded interested people who were looking at using social media to make connections."

Increasing his involvement in the social media space also gave Winfield an idea. "There were so many other résumés that looked so similar to mine. I started thinking about how I could stand out from the crowd," he explained. "I thought social media would be a great way of going about that."

Aside from posting his résumé on LinkedIn, creating a blog and fan page on Facebook and uploading a video manifesto to YouTube, Winfield decided to take out custom, targeted Facebook ads to reach companies directly.

Through targeted ads, Facebook advertisers can reach a specific audience based on keywords or location or even target specific businesses.

"I created specific small ads for individual companies that appeared within the news streams and on the walls of people on Facebook," Winfield explained. "They would see an ad from me that said 'You need Doug Winfield' followed by a description of who I am." Viewers could then leave a message for Winfield or become a fan of his page.

Winfield targeted 20 to 30 companies that way, each with a dedicated ad. Over the period of his two-month campaign, he received 477,000 views within Facebook. Of those, 1,382 people clicked on the ad to see more information. The total cost for Winfield's campaign was $170.

In January, Winfield was offered a position as the vice president of digital corporate practice for MS&L in New York and is responsible for coming up with new ways to communicate their clients' message using social media. Winfield says that one of things that helped him get hired was his own social media campaign. "That helped me stand out from the pack."

Although the campaign didn't directly lead to an interview at his new employer, Winfield was able to successfully demonstrate his innovative approach to social media by showing them what he had done online, and his new bosses responded well. "I could show what's possible and present myself in a positive way. That went a long way to showing them I could do the same for clients."

Social media expert Sandra Fathi calls Winfield's creative approach to the job hunt a very smart move, but cautions that it's not for everybody.

"Given his practice area it was a way to showcase his knowledge and intelligence and get the attention of the right folks," she said. "That level of enthusiasm definitely wins brownie points," Fathi added.

In today's job market, job seekers must both stand out from the masses and demonstrate their interest in each specific company, she said, but they should also be sensitive to the type of organization they are targeting.

"The social media skills are exactly what his employers are looking for, so it's a perfect match in his case," said Ford Myers, president of Career Potential, LLC, and author of the book, "Get the Job You Want, Even When No One's Hiring." "For other people it could border on being inappropriate."

"You have to ask yourself, is this appropriate to my own market?" he added. "It would not be the right approach for a nurse or accountant."