Their economy in tatters, Greeks try to remember how to cut back 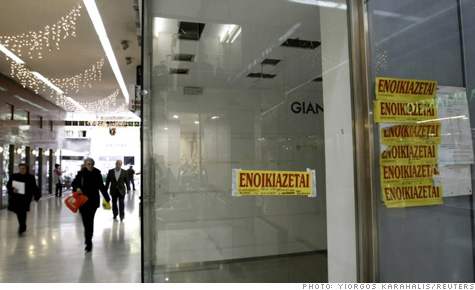 NEW YORK (Fortune) -- Elly Koufakis, the co-owner of a busy beauty salon in the posh Athens suburb of Psyhiko, isn't used to sitting around. The shop's staff rarely has a minute to breathe between haircuts and manicures. But since the debt crisis in Greece exploded in January, they now spend half their workday sitting idle. "We've seen a 50% drop in our appointments," Koufakis says. "Everyone seems to be reining in their spending."

As the government's austerity measures -- pay freezes, budget cuts, and tax hikes, among them -- kick in and the country's financial crisis deepens, Greek citizens are trying to learn how to economize. But after a long boom, cutting back is turning out to be a rusty skill, especially for a country whose citizens have a reputation as legendary spendthrifts.

Take Haris Georgatou, for example. A broadcast engineering technician, he points out one way he's adapted to the new national concern. After years of spending $15 a day on coffee, he now makes his own at work.

Hair stylist Koufakis, a mother of three, says she and her husband now take the kids to the theater and the movies only once a month, compared to as many as five times in the past -- and they now enjoy dinners out once a month as opposed to every weekend like they used to. She's even cut back on toiletries. While she used to buy special SpongeBob SquarePants toilet paper for her children, she doesn't any more. "Now I buy just what I need," she says.

All this sudden budget-mindedness is a huge change in the nation's mindset. Greeks are legendary spendthrifts with a reputation for throwing cash around freely. "Greece is a poor country with rich people," Kyriakos Sarantis, CEO of Sarantis, a $363 million consumer products company, is fond of saying.

When the austerity programs truly kick in, new habits are likely be forged -- and the changes Greeks are going to have to go through will leave deep marks. Cutting out SpongeBob and going out less often are just the first sacrifices they'll have to make to save their economy. "Hey you, Greek, wake up," the leading Sunday paper Proto Thema wrote last week. "The days where you used to buy a kilo of mandarin oranges instead of just the two you needed are finished."

Most Greeks realize the party is over and are already starting to cope with the hangover. Perhaps the best place to see this is in the country's notorious habit of paying for goods and services under the table.

Economists estimate that underreported income could be worth as much as 25% of Greece's $340 billion economy. One of the government's reforms meant to close the gaping deficit is to try to catch evaders by enforcing measures that encourage consumers to ask for receipts and pressure providers to report the income.

The government's move is already having an effect. A year ago, hardly anyone asked for receipts. Now with what Yannis Stournaras, an economist at the Foundation for Economic and Industrial Research, a nonprofit think tank in Athens, calls a "receipt revolution," almost no one leaves a coffee shop without demanding a paper trail. "Greeks are fed up with tax evaders," says Alexi Papahelas, editor of Greece's largest daily, Kathimerini.

Wealthy Greeks, too, who used to treat spending as a sport, have begun to cut back on conspicuous consumption. Architect and hotel-owner Stelios Zapantis, who builds vacation homes on the Ionian island of Cephalonia, says last year, at this time, he was building 30 vacation homes. This year, he only has six on his slate.

Most bouzouki clubs, where Greek music is played after midnight, are now open only on weekends. Restaurants are practically empty, mid-week -- and reservations are easy to get, even at the most trendy spots. Chrysanthos Panas, the owner of four upscale restaurants, including Island, a well-known club-restaurant on the coast, notes that customers are drinking less and leaving earlier than ever before. "People don't stay out all night like they used to," he says. "In a way, they're starting to behave like Europeans."

Panas has also seen at least a 50% drop in corporate events, maybe more. "No one is planning anything," he says. And things are just going to get more intense as tax hikes kick in and public servants start to feel the sting of cuts.

Reading the tea leaves, some Greek entrepreneurs are downshifting their own business plans in anticipation. Instead of opening an upscale eatery like he might have in the past, hotel and restaurant owner Zapantis, for example, plans to open a waterfront pizzeria in Argostoli, the island's capital. "Pizza's cheap," he says. "Greeks still are going to eat out, no matter what. They're just going to spend a lot less." Just how much less they have to spend we're still waiting to see. No one believes the bottom is even close.

In Greece, the people carry on