Can Dodd wake the watchdogs? 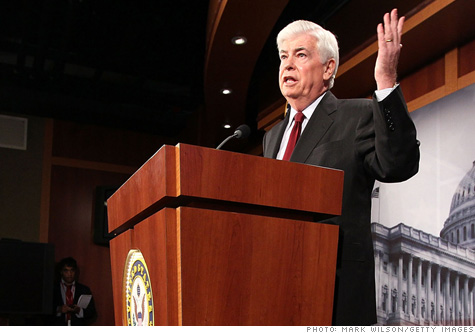 (Fortune) -- The latest financial regulatory reform proposal leaves many chefs in the kitchen. But will anyone actually mind the stove?

The Federal Reserve would be in charge of overseeing the biggest financial firms and a new council of regulators would monitor risks to the financial system.

Those changes would surely improve on the current arrangement, which Dodd described this month as "a hodgepodge structure ill-equipped to safeguard our economy."

But what banking regulators really need is something the compromise-minded Dodd bill doesn't provide: the will to make tough, unpopular decisions that check the risks to the federal safety net and taxpayers.

"Bank soundness regulation has no political constituency until it's too late," said Richard Carnell, a law professor at Fordham University in New York and a former Treasury official. "The pressure for expediency is strong, so it's not surprising that the regulators fail to set higher standards or take preventive action."

Even with the meltdown of 2008 fresh in mind, keeping banks on a tight leash is apt to draw catcalls in Washington.

Policymakers are widely expected to raise the amount of capital banks hold against possible losses. With hundreds of small banks likely to fail by year's end, credit will be even harder to come by in many areas.

Legislators are focused on high unemployment and weak lending to small businesses, and there is already considerable talk that bank regulators are being too strict.

Treasury Secretary Tim Geithner told Congress this week that bank supervisors were being urged not to "overreact" to fallen loan values.

Meanwhile, the watchdogs have a lot of ground to make up. Carnell notes that bank capital requirements have loosened over the past two decades, a period in which the biggest banks got much bigger.

Congress was so eager to help its banker friends that in 1996 it passed a measure that forced the Federal Deposit Insurance Corp. to forgo a decade's worth of insurance premiums from well-capitalized banks.

That largesse left the industry rolling in record profits. But the FDIC deposit insurance fund -- which didn't expand as much thanks to the congressional cap on FDIC fee collections -- recently posted its biggest deficit ever.

Officials have been questioning federal bank oversight for decades, though efforts to change the system have typically run aground in the face of opposition from the bankers and the Fed itself.

One such effort came in the early days of the Clinton administration, when Treasury Secretary Lloyd Bentsen proposed consolidating the four federal banking regulators into a single agency on the grounds that doing so would make regulators more accountable and cut costs for taxpayers.

The proposal won little support in Congress, where it was opposed by then Federal Reserve chief Alan Greenspan. Greenspan warned in 1994 that unifying federal bank supervision and doing away with competition among regulators "closes off a safety valve, inevitably leading to greater micro-management of banks."

Of course, micromanagement didn't turn out to be the major defect of bank regulation in the recent crisis.

Treasury's Office of Thrift Supervision, for instance, did little to prevent the collapse of the giant IndyMac and Washington Mutual thrifts, and was AIG's (AIG, Fortune 500) primary regulator in the years leading up to its bailout.

Most of that agency's budget comes from chartering fees it collects from institutions it regulates, giving it a strong incentive to expand and enabling some big firms to pick and choose their regulators.

Dodd's proposal would shut down the OTS and would limit shopping by regulators and banks by spelling out which agencies will oversee various types of institutions.

But such forum shopping isn't the only symptom of the current system's ill health, Carnell said. Though the Dodd bill would try to eliminate bailouts by forcing big financial companies into bankruptcy, regulators confronting the next crisis still could find themselves drawn by familiar forces toward ad hoc responses.

"Crisis managers become heroes, and crisis preventers get forgotten," Carnell said. "Any move that cuts back an agency's role in crisis management would also tend to concede prestige."

Dodd's latest proposal, by trimming just one of the four federal bank watchdogs, takes a step back from the proposal he made in November. Those rules would have consolidated federal banking regulation under a single agency called the Financial Institutions Regulatory Administration.

If Dodd's latest proposal is less ambitious than his earlier one, though, he is showing more urgency than he has in the past. Dodd's response to Bentsen's 1994 plan, which warned of a possible crisis within years, was to tell the White House not to sacrifice banking industry stability at "the altar of efficiency."

How to craft a toothless bill