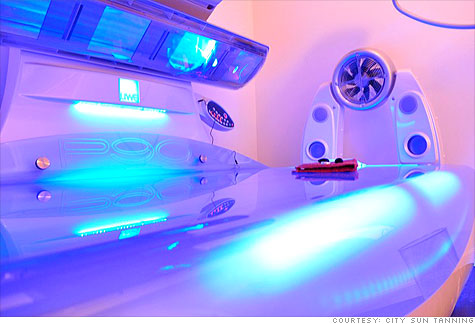 The health care bill imposes a 10% tax on customers who use ultraviolet tanning lamps, like the ones used at City Sun Tanning in New York (pictured).By Blake Ellis, staff reporterMarch 24, 2010: 12:02 PM ET

NEW YORK (CNNMoney.com) -- The Obama administration is turning up the heat on tanning salons across the country with the passage of its new health care bill.

To help fund the $940 billion health care overhaul, a 10% tax on individuals receiving indoor tanning services was tacked on, and the initiative is expected to generate $2.7 billion over ten years.

As a result, many salon goers and owners are outraged by the so-called "tanning tax" and think they're being unfairly targeted by the bill.

"It's terrible," said Jan Meshon, owner of City Sun Tanning in New York City. "You know how they say that passing a bill is a bit like making sausage? Well this was the weirdest, ugliest piece of sausage to get stuffed into the bill."

City Sun Tanning customers are shocked and disappointed by the tax as well, and Meshon said he expects the tax to hurt business.

"We'll do everything to keep our customers, but they are very upset by this," he said. "When they first hear about the tax, their reaction is, 'What? How did that get in there? Why are they attacking me?'"

Meshon said the average customer spends about $15 to $20 per visit, and a typical tanning session lasts about 10 minutes, which is roughly the equivalent of thirty minutes in natural sunlight.

"An extra 10% on top of that is definitely not helpful," he said. "All of our customers would like to spend less already."

Adrienne Zarisky, a regular tanner, said she has used tanning salons several times a week for the last two years in order to maintain sufficient levels of Vitamin D.

"I use it not so much for the cosmetic effect as I do for my health," she said. "But of course, in the dead of winter it just feels so good."

Zarisky said she probably won't change her tanning habits because it's still "cheaper than having to take sunny vacations three times a year," but she is sure the tax will cause financially-strapped tanners to give up bronzing, and in turn, will seriously hurt the salons.

"I really fear for the salon owners," she said. "The place I go has really been a fixture in my neighborhood. I got to know some of the people that work there and they're lovely people -- I would just really hate to see people like that lose their jobs."

Jobs on the line

The tanning tax will go into effect July 1 and will apply to electronic products designed for tanning that use one or more ultraviolet lamps with wavelengths between 200 and 400 nanometers. Other sunless tanning options such as spray tans and tanning lotions are not included in the tax.

"This is going to close tanning salons," said Joseph Levy, vice president of the International Smart Tan Network, which has 3,000 member salons. "You can't just pass on a tax like this to customers and not have it hurt your bottom line."

Levy estimates that about 9,000 jobs are in jeopardy and more than 1,000 salons are at risk of being forced to close their doors. The tax also targets middle-class and female business owners, with about two-thirds of tanning salons in the U.S. owned by women, he said.

In addition to putting thousands of employees out of work, Levy predicts the tax will ultimately generate 40% to 50% less than the projected $2.7 billion.

"There was no due diligence done on how much money this will raise, and it's going to be nowhere near what they are expecting," he said. "After taxing female entrepreneurs and primarily female customers, this is the other part of what's so repulsive about this tax."

The health care reform bill is returning to the Senate for revisions, and Levy is rallying support to nix the tax from the measure before it's too late.

"We have more than 200,000 signed letters to Congress between our businesses and customers," he said. "We're hopeful that the Senate and Senators we've talked to will come through and get this ridiculous tax out of the bill."

As another last ditch attempt to remove the tax, the Indoor Tanning Association has started a Web site, Stopthetantax.com, where tanning salon owners and customers can send personalized letters of opposition directly to state representatives and senators.

The 10% tanning tax has replaced the 5% tax on cosmetic surgery that was originally included in the bill.

That tax, nicknamed the "Botax," would have included Botox injections and breast implants among other elective surgeries, but was cut out of the bill last year after heavy lobbying from the medical and dermatology industries.

Because the Botax was expected to generate $5.8 billion, more than double the amount the tanning tax is projected to raise, many tanning industry professionals are furious about the switch, arguing that while the tanning tax targets middle-class, women-owned businesses, the Botax would mainly impact wealthier Americans who would be more able to handle higher prices.

The American Academy of Dermatology, which strongly opposed the Botax, applauded the inclusion of the tanning tax as a replacement because of the significant health risks associated with indoor tanning.

According to the Academy, indoor tanning before the age of 35 is linked to a 75% increase in the risk of melanoma, the deadliest form of skin cancer, which has also become more common in young females. Meanwhile, nearly 30 million Americans hit the tanning beds each year and about 2.3 million of these people are teenagers.

An indoor tanning tax will therefore "serve as a signal from the federal government to young people that indoor tanning is dangerous and should be avoided," said Dr. William James, president of the academy.

Meshon and Levy, however, said many of the health concerns over indoor tanning are unjustified and exaggerated.

"It's at least as good for you as it is bad for you," said Meshon. "There's a lot of misinformation out there and scare tactics trying to make indoor tanning sound like the scariest thing in the world, and while there are risks to tanning like almost anything else you do, the risks in tanning are relatively low."