A star fund manager gets cautious 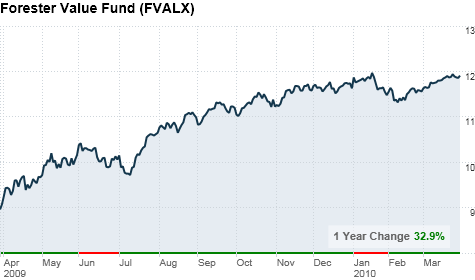 (Fortune) -- In the past few years you'd have been paid well to listen to Tom Forester. He saved investors tens of millions in 2008 as the only U.S. stock manager whose fund posted a gain for the year.

On the heels of that success in March 2009, he cut back his large cash positions and plowed into stocks when the S&P 500 was bottoming out. One year later, he now argues that stocks are overpriced and has recently moved back into more cash.

But that shouldn't make long-term investors wince. If you invested $10,000 in the Forester Value fund (FVALX) ten years ago, you'd have $17,255 today, according to Morningstar. Meanwhile, the average stock fund is still in the red.

A day after the Dow Industrials hit an 18-month high of 10,866 last week, Fortune sat down with Forester for an hour-long chat. He discussed why he expects home prices to fall further, how Greece's problems will hurt U.S. companies, and why investors should turn cautious. Edited excerpts from the conversation are below.

It looks like you're still almost fully invested in stocks. What do you see in the market?

If you believe analysts' estimates on stocks, the market's trading at 14 times this year's earnings. If you believe more of a top-down sort of a view, it's about 20 to 23 times earnings.

It's kind of like in the tech bubble when everybody believed the operating earnings, not the reported earnings. They figured, well, reported included writeoffs. But don't worry about them -- they're not about the future.

People are looking more at operating earnings right now and saying the market's cheap. If you look on a reported basis, it doesn't look like it is. It's trading at 20 to 25 times earnings -- and that's pretty high.

I thought everything has already been written off. The government made banks write down all their bad assets. The government got in there with a fine-toothed comb, right?

No, not at all. What happened was, the [Financial Accounting Standards Board] rescinded their mark-to-market rule. They told the banks, look, if there's any way you can justify these things coming back up to where you had them a couple of years ago, go ahead and keep them there and don't write them off.

Look at the Lehman report that came out. The Fed steps in on Lehman and they say, "Okay, here's a stress test. Do you guys pass it?" "No."

I mean come on! They didn't pass three stress tests from the New York Fed until they came up with their own that they could pass. So, you tell me where the watchdog is, and you tell me just how stringent they are with these fine-tooth combs.

So, does this matter? I think longer term it does. In the short run markets can do anything.

You say there are more problems in the U.S. housing market?

There are seven million homes, or something like that, that at some point have to go through foreclosure. The problem is that foreclosures usually go for 20 % less than what an organic sale would be. Because you were selling your house on the market, you could wait a lot longer than the bank can. The bank just wants it gone. They tend to take a lot less.

Let me get back to where all this goes and the reason why I focus so much on mortgages and on Europe: It affects our ability to grow. Mortgage problems hurt bank-balance sheets and banks' ability to lend and the country's ability to grow its GDP. Now with Europe you can't export as much there because they are in recession, and austerity programs in the PIIGS countries will keep pressure on them. It hurts our companies' ability to grow.

To me the clouds are still out there. People are saying we know there are clouds, but the forecast is for sun tomorrow. But I'm seeing the clouds and saying -- I don't see where we've really resolved a lot of these issues.

You're known for looking any undervalued stocks and there's not much out there, is there?

That leaves you selecting health care -- you've been saying that for some time.

Yeah, but you know the pharmaceuticals that we own were among the best performing stocks after they announced the health-care bill. A lot of these pharmaceuticals are trading at about eight times earnings, and that's very attractive in a market that's 20.

And what's your cash position?

How is that in the scale of what you've had in the past?

It's not that much. It says that we're cautious. It's a lot for a mutual fund.

What about Microsoft, one of your biggest holdings?

Still like it. We're letting that run. Windows 7 has been well-received. We still haven't seen corporations changing over to that in a strong way yet, but we still think there's a lot of upside there. They come out with their Office launch here in June. Hopefully that gets picked up by the corporations.

You're starting to see a little bit better budgets, and so we're expecting a corporate upgrade cycle. We think that's good for Microsoft (MSFT, Fortune 500), and we think it's good for HP (HPQ, Fortune 500) as well.

Do your holdings reflect what could be a difficult time for the market?

Right now we're set up wrong for where the market's going. Maybe they're right. I'll participate with the market on the way up. But I'm going to be cautious until I feel like earnings are real. And we've done fine. We're up over 20%. It seems to work for us.

Recovery: A long bearish road ahead

Are the Brits headed for the PIGS sty?