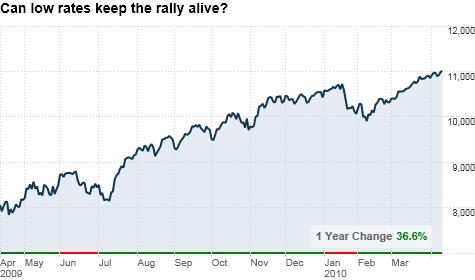 (Fortune) -- Stock-market bulls are hoping the sharp rebound in corporate profits will keep the rally alive, but continued low interest rates might be more important.

Good first-quarter results will certainly help, and profits will be jumping when numbers start rolling in this week. Earnings at S&P 500 companies are expected to rise 34% from their depressed level a year ago. Reports are due from JPMorgan Chase (JPM, Fortune 500), Google (GOOG, Fortune 500) and General Electric (GE, Fortune 500), among many others.

But the real secret weapon is the Federal Reserve's policy of holding interest rates near zero, which bulls contend will fuel a long-lived rally by forcing investors out of cash accounts gathering next to no interest.

"As long as we remain in this monetary twilight zone, stock prices should continue to rise, and corrections should be short and shallow," economist Ed Yardeni wrote in a note to clients this week. "The alternative to stocks is to earn zero in the money markets."

Though it has been 16 months since the Federal Reserve cut its Fed Funds rate to a range of zero to 0.25%, those who expect stocks to extend their gains say many people are only now warming to the idea of jumping back into the market.

"People eventually wake up to the fact that they're earning nothing," said Peter Cohan, who teaches business strategy at Babson College in suburban Boston. "It's sort of a case of getting over the hump."

Cohan concedes that a market driven by massive liquidity flows "raises valid concerns." Among them, he said, is that a bubble may form as investors who had been sitting out belatedly decide to chase the rally.

So far there's little evidence of that, he said. For one thing, money has been pouring into bond funds and trickling out of stocks. Since last July, bond market mutual funds have netted $252 billion while stock funds have seen outflows of $36 billion, according to the Investment Company Institute.

Cohan added that cash held in money market funds has dropped 24% from its postcrisis high, but would have to drop even more sharply to raise bubble worries.

Not everyone is taken by this logic. Andrew Barber, a strategist at asset manager Waverly Advisors in Corning, N.Y., said individuals should consider trimming their holdings of stocks that have rallied sharply and are richly valued or sensitive to a rise in interest rates.

For now, "portfolio managers and advisers are compelled to stay long equities rather than earn zero in bonds and look like an idiot to their investors," Barber said. "But everyone can see there's going to be a shift at some point, and now is when they're trying to get set for that."

A widely awaited Fed interest rate hike appears a while off, given policymakers' worries about unemployment.

"It's very hard to justify the market staying at its current level," said Barber, whose firm doesn't currently own stocks but could profit on a further rise through its holdings of futures contracts. "It reminds me of a game of musical chairs."

Help Desk
Track testing tires to find the best
Find out how TireRack tests and reviews tires and why choosing the right ones for your car is so important. Play
Markets
Data as of 2:44pm ET
Data as of 6:29am ET
Sponsored by
Sponsors