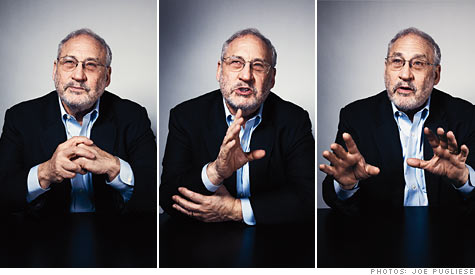 One of the few practitioners of the dismal science to foresee how the economy would fall apart in 2008, he's also uniquely suited to make sense of our fumbling efforts to pull ourselves back together.

His research on "information asymmetries," which won him the Nobel Prize for economics in 2001, argued that because market players act on imperfect and incomplete data, markets themselves are far more disorderly than classical economists would have us believe, making government intervention a necessity.

And as chief economist at the World Bank during the Asian meltdown of 1997, Stiglitz gained hands-on experience in the disorderly business of financial bailouts.

His new book, "Freefall: America, Free Markets, and the Sinking of the World Economy," looks at the roots of the Great Recession and the dangers of what he calls bubble capitalism. His views run to the left of those held by the economic advisers to either the previous or current occupant of the White House.

Then again, Stiglitz was warning of trouble ahead as they hummed the siren song of financial innovation. A professor at Columbia University, Stiglitz, 67, spoke with contributing writer David Futrelle about bubbles, bailouts, and how to improve our less-than-rosy prospects for the decade. Edited excerpts follow.

Are the financial reforms now being debated in Congress strong enough to prevent the next crisis?

They're a step in the right direction, but they don't go far enough. One of the biggest problems is that the Senate's version of the proposed Financial Product Safety Commission [which would try to rein in some of the egregious lending practices that helped inflate the housing bubble] is inside the Fed, and the Fed has a terrible record in consumer protection. It's an organization basically dominated by banking interests.

Congress also hasn't done enough on the credit default swap issue, which was at the heart of the crisis. [Swaps insure against a borrower's default. Speculation in them reached astronomical levels during the bubble.] The lack of transparency in a significant fraction of that market will continue, and that means that the discipline of the marketplace can't occur, because no one can know what's really going on.

Another big issue is bonuses and incentives. We've been reluctant to take the kind of strong measures that the United Kingdom has taken [such as heavy taxation of bonus payments]. Incentives matter. They affect behavior, and they can encourage excessive risk taking.

Did the bank bailouts help or make the situation worse?

They prevented disaster. If the banks had gone bankrupt, there would have been economic chaos. Beyond that, the bailouts didn't do what they were intended to do. For one thing, we put no conditions on the banks, and so much of the money was squandered. It went to dividends and bonuses. They didn't do more lending.

But the banks are paying back the money, right?

Some are, but it's likely that we will lose hundreds of billions of dollars. AIG is almost certainly not going to pay back the $180 billion taxpayers put in. Even if we get back nominally what we put in, we won't be compensated for the risk we took. Moreover, since we bailed out big banks, while letting smaller banks fail, the problem of "too big to fail" has gotten worse.

Wall Street certainly seems to have recovered. Does that mean a recovery for Main Street this year?

Both the Bush and Obama administrations thought that if we could only restore the banks, everything would go back to normal. They wanted to pretend that there never was a bubble. My interpretation is quite the contrary. Even if the banks are fully fixed, that leaves overleveraged households and a lack of demand needed to get the economy going.

Unemployment remains very high. The pace of home foreclosures is likely to increase this year over last. A quarter of all homeowners are underwater on their mortgages, and problems are starting to hit commercial real estate as well.

Meanwhile, forecasters expect more bankruptcies among regional banks. Many of them are the traditional lending institutions for small and medium-size businesses. I hear from a lot of small businesses that credit is becoming less available.

So how long will it be before the United States sees a strong recovery?

The Congressional Budget Office has said that it could take until the middle of the decade for unemployment to return to normal. And that's based on the assumption that we don't have any big bumps in the road -- like a commercial real estate crash or a double-dip recession in Europe. So as I look at all the potential pitfalls, I would say that the likelihood that we have a strong recovery before the middle of the decade may be a rosy scenario.

Hasn't the passage of the stimulus package in the wake of the credit crisis helped at all?

It has worked. But it was too small. And too much of it was in the form of tax cuts.

They are not strong enough. The point of the stimulus was to increase spending in a hurry to shore up aggregate demand. But when people face an overhang of debt and uncertainty in the labor market, if you give them a check or tax break they're going to save a lot of it. That's perfectly good for their own security, but it doesn't stimulate the economy. A better way of getting money into the system is to fill in the gaping holes in state budgets.

If you wanted to have money going into the economy quickly and efficiently, that was the way to do it. Putting the money into state budgets would have allowed us to stabilize existing institutions [such as schools and police forces].

Now the President and others are talking about budget cuts. Does that make sense?

No. Basically, Obama is giving in to the same sort of shortsightedness that got the financial markets in so much trouble. Worrying excessively about deficits during a crisis is counterproductive. The International Monetary Fund went into Argentina during its crisis a decade ago, crying about deficits, deficits, deficits, and pushed that economy over the cliff.

The key issue is how we spend money. I've done calculations that show that if we borrow money to make investments in infrastructure, technology, and education, the long-term national debt will be lower. If you spend money, and the economy grows, you get more tax revenue.

The most obvious example where you can see a high return on investment in the United States is in infrastructure. If we had invested $2 billion in the New Orleans levees, we would have avoided more than $80 billion in damages from Katrina.

What should we be spending on, then?

We need greater investment in high-speed railroads and other public transportation. And we need to invest in technology. We invested very heavily in the '80s in particular -- public investments that led to the Internet, to the decoding of the human genome. And because of the public investment, there were huge investments in the private sector that generated huge returns for our economy. We can't know what the next breakthrough will be, but if you're not spending the money, you won't have that breakthrough.

We've spent so much lately on the stimulus package, the bank and auto bailouts, and two wars -- how much of a burden will this be for us in the long run?

There are two ways of looking at this. As a percentage of our gross domestic product, can we afford it? Yes, we're a wealthy enough country. The other way of looking at it is to ask what we could have gotten with the money we squandered.

Let's talk about another long-term concern: inflation. There are a lot of people worrying about inflation. Now everybody agrees that in the short run the problem is deflation. And the Federal Reserve says, "Don't worry, we'll deftly take out liquidity the moment we need to" by raising interest rates to forestall inflation.

On the other hand, the Fed listens closely to financial markets, which worry more about inflation than jobs. So it's more likely they'll step on the brake too hard, and we'll go into a double-dip recession.

How much is the Federal Reserve to blame for the Great Recession?

They bear a lot of blame. It was a fairly complete mess-up. They should have been regulating the housing market and the banks. But they were regulators who didn't believe in regulation, because of their faith in free markets.

In the midst of the housing bubble, they said there was no way of knowing if we were in a bubble. Of course, you can't be 100% sure, but you can be pretty sure. Even after the bubble broke, in early 2007, they had no idea what was going on. They said again and again that the problem was contained, and that the economy was about to get going, when in fact it was in the process of undergoing a slow meltdown.

We've been having bubbles ever since people have been investing. Is there any way to avoid them?

The answer is yes. We did manage to avoid them for 30 or 40 years after the Great Depression because we passed adequate regulations. I'm not sure that we could ever stop them forever, but we know enough about them to try. The Fed had the instruments to do it this last time.

The problem is that memories are short. In 20 years, or maybe even 10 years, someone will again say that we have a new economy, that things are different this time, that we're smarter this time, and that we've invented something that allows us to defy gravity. And people will believe it.