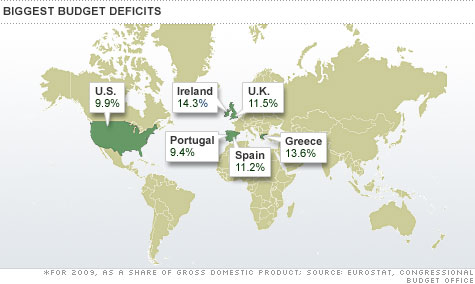 (Fortune) -- Europe is finally cobbling together a credible Greek bailout. But even a big wad of cash may not be enough to prevent another round of market mayhem.

Officials from the European Union and the International Monetary Fund said Wednesday they hope to agree this weekend with the Greek government on the terms of a bailout package. The IMF said the package could cost as much as $160 billion over three years -- well above the sums previously discussed.

European officials have been "dragging their feet" on Greece for months, said Mitchell Orenstein, a European studies professor at Johns Hopkins University in Baltimore.

But the events of the last week, with three major European countries suffering credit downgrades and borrowing costs soaring for the smaller nations on Europe's periphery, have made clear the need to act decisively.

"There is a need to act swiftly," IMF managing director Dominique Strauss-Kahn said at a press conference Wednesday. "We have to do this because if we don't fix it in Greece, it may have a lot of consequences on the rest of the European Union."

Indeed, the crisis is so severe that one official of the Organization for Economic Cooperation and Development said the Greek situation is "like Ebola. When you realize you have it you have to cut your leg off in order to survive."

The message seems to be getting through. Even German Chancellor Angela Merkel, who has been against Greek aid given German voters' strong opposition to bailouts, promised Wednesday that the EU's biggest economy would "do its part."

Yet even if Germany comes through with the money, it's not clear whether a Greek bailout will be enough to stem the tide. Yields on Greek bonds surged to record highs Tuesday following a credit downgrade to junk status, and those in Portugal jumped as well.

Bond prices bounced back Wednesday as the Greek bailout seemed to take shape. Yet stocks in Europe sold off anew after Standard & Poor's downgraded Spain, saying weak growth would pressure its budget position.

Tumbling bond prices among cash-strapped southern European nations "amount to a fundamental repricing of the risks of investing in these countries," said Tim Backshall, a strategist at Credit Derivatives Research. "It's long overdue."

The risk now is that even if Europe puts its political differences aside and funds a Greek bailout package, key problems remain unaddressed -- such as a lack of cohesion in dealing with the fiscal problems of member states.

"The broader incapacity of euro area institutions is what's really on display here," said Orenstein. "It's going to be hard to keep the euro zone going without greater fiscal and monetary authority."

Questions about the authorities' capacity to react quickly could keep borrowing costs rising in Portugal, Spain and Ireland, which along with Italy and Greece make up Europe's so-called PIIGS. That could send capital flooding out of those countries, undermining the liquidity-fueled recovery that has taken place around the globe.

"It's all feeling a bit fragile right now," said Backshall, who told clients last week that investment-grade corporate bonds are pricey after a long runup and due for a fall. He noted that the credit default swap spreads on U.S. financial institutions such as Bank of America (BAC, Fortune 500) and Citigroup (C, Fortune 500) have widened significantly in recent weeks, and in some cases are approaching late 2008 levels.

The flare-up in Europe also offers a reminder that many bills from the financial bailouts have yet to be paid -- and that merely flooding the markets with cash can't conceal the structural problems of weak institutions and overextended countries.

"The remarkable thing at this point of the global cycle is that global capital markets are ultra-liquid," Tullett Prebon economist Lena Komileva wrote in a note to clients. "Yet, there is a growing tier of sovereigns and banks that are short of capital, raising the risk of another global systemic shock."