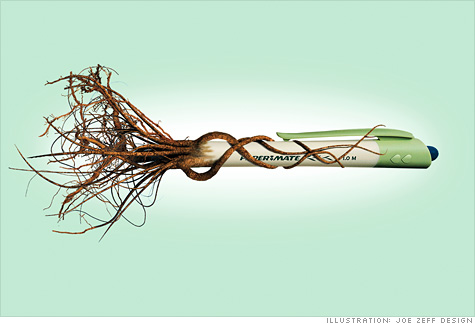 (Fortune) -- A thousand miles off the coast of California floats the Great Pacific Garbage Patch, a mass of plastic trash whose exact size is unknown but some experts say is bigger than Texas. Where does it come from? Some of it can be traced back to the U.S. Only 7% of the plastic Americans consume gets recycled. The bulk is thrown into landfills or, worse, into our rivers, lakes, and oceans, where fish consume toxins that attach to the plastic. Then we consume the fish. Not good.

Richard Eno, the CEO of Metabolix (MBLX), a small public company based in Cambridge, Mass., and spun out of MIT, thinks he can help fix the problem. His solution? Making plastic out of plants. Plastic products made partly or wholly of plant matter already exist. But until now no one has been able to make a 100% bioplastic that is durable, stands up to extreme heat -- and is biodegradable.

Metabolix, whose stock has nearly doubled over the past year, has genetically engineered a microbe that eats sugar from corn and generates a plastic-like molecule called PHA. The plastic will after a few months decompose in water or soil and is so pure that you can throw containers into your backyard compost heap, where it will degrade into mulch for your vegetable garden. Metabolix also says its plastic is carbon neutral, but independent verification awaits.

The company, in a joint venture with Archer Daniels Midland (ADM, Fortune 500) called Telles, is about to start shipping its Mirel plastic pellets from a new plant in Clinton, Iowa. One of the first products is resin for a $1.25 biodegradable Paper Mate pen made by Newell Rubbermaid (NWL, Fortune 500). Paper Mate says advance demand is strong. The pen, however, does cost more to make. Metabolix charges about $2.50 a pound for its green plastic, around twice that of traditional feedstock. The good news is that Paper Mate's pens use so little plastic that the pen maker needs to reduce its margins by only a couple of percentage points compared with its regular pens. Says Bill Mullenix, president of Every Day Writing at Newell Rubbermaid: "Where a pen like this pays off is that it is easy to market. Consumers want green today. We'll more than make up the lower margins on units sold."

Metabolix's plastic is genetically modified -- a no-no in environmental circles. Also, as bioplastics grow in popularity, critics worry that demand for corn will rise dramatically, driving up food prices -- the same dilemma created by corn ethanol. An undaunted Eno says Metabolix is working on next-generation plastics made from nonfood material such as switchgrass, which grows on the prairie. If all goes according to Eno's plan, it won't be long before that Great Pacific Garbage Patch starts shrinking.

Grading Obama on the environment

An interview with eSolar's Bill Gross