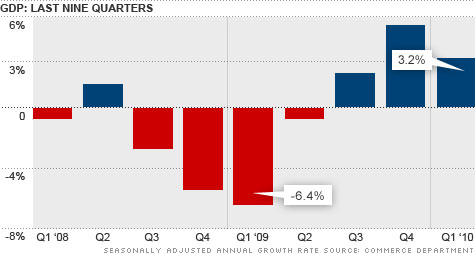 NEW YORK (CNNMoney.com) -- The U.S. economy kept growing in the first three months of this year but at a much slower pace than at the end of 2009, according to a government report Friday.

Gross domestic product, the broadest measure of the nation's economic activity, rose at a 3.2% annual rate in the quarter, the Commerce Department said.

That's down from the 5.6% growth rate in the fourth quarter, and slightly below economists' forecasts for a 3.3% increase.

The report marked the third straight quarter of growth, confirming the view of many economists that the recession that started in December 2007 ended at some point in the middle of last year.

"Each additional quarter of GDP growth is a welcome sign that the economy is healing from a severe recession that cost over eight million jobs and wiped out trillions of dollars in household and family wealth," said Christina Romer, chair of the White House Council of Economic Advisers, in a statement.

But Romer cautioned that "given the severity and depth of the recession, it will take a number of quarters of robust growth and strong employment gains to return the economy to full health and full employment."

By some measures, the latest report showed more substantial growth than the fourth quarter.

"Despite a softer headline number than we had expected, this is an encouraging report," said economist Peter Newland of Barclays Capital.

In the fourth quarter, most of the growth was due to businesses no longer making the deep cuts in inventories that they had made early in 2009 when they were concerned about a sharp fall-off in demand. But the rise in consumer spending was fairly modest in the fourth quarter, increasing at only a 1.6% annual rate.

This time, inventories contributed less to the economy's rise, while consumer spending grew at a 3.6% annual rate, the biggest rate of increase in three years.

Household spending is important since it accounts for more than two-thirds of the nation's overall economic activity. So the rise in spending was the main driver of growth in the quarter.

"Consumer spending has come out of the deep freeze," said Sung Won Sohn, economics professor at Cal State University Channel Islands. "To be sure, the job market is poor and yet to show sustained recovery, but consumers are feeling better about the future."

Still, while there may be signs of greater strength, the report also detailed some of the headwinds facing the economy.

Investment in residential real estate fell nearly 11%, ending a two-quarter rebound in that battered sector and subtracting from overall growth. And commercial real estate investment dropped at a 14% rate, although that was a slower pace than in the fourth quarter.

"I think you can expect the state and local governments will continue to be a bit of drag and the federal government numbers won't get much better as we get to the end of the stimulus money," said Keith Hembre, chief economist of First American Funds in Minneapolis.

Unemployment brightens in many cities