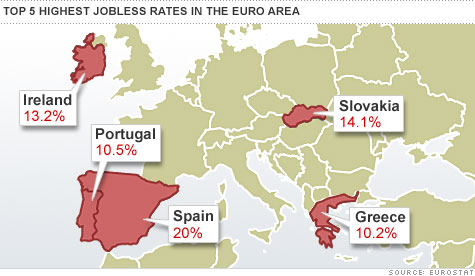 NEW YORK (CNNMoney.com) -- The unemployment rate in Spain reached 20% in the first quarter, the Spanish government announced Friday, with 4.6 million people out of work in the country.

The rate is up from 19% in the previous quarter, and represents the second-highest unemployment rate in the 27-member European Union, after Latvia, according to Eurostat, the EU's statistics service.

Analysts said the first quarter of the year is historically poor for Spain because of a drop in labor-intensive activity like construction, agriculture and tourism.

The downgrade raised fears that Spain could be headed for a crisis like the one plaguing the Greek economy, which is negotiating an emergency bailout from the European Union and International Monetary Fund.

"The economic situation in Spain is much more dire than other countries in the region," said Enam Ahmed, a senior economist Moody's Economy.com. "The Spanish government needs to make quite large adjustments in its public finances."

Spain, the euro zone's fourth largest economy, has stagnated as other European economies begin to recover from the global economic downturn.

The nation's recovery has been hindered by a dismal housing market and long-standing economic imbalances in Europe, Ahmed said. He expects Spain to be in recession this year, with very weak growth resuming in 2011.

The bleak outlook for Spain, which has debt obligations three times that of Greece, has raised the specter of a broader debt crisis. As European leaders debate a rescue plan for Greece, investors have become increasingly nervous about the fate of other struggling EU members such as Ireland, Portugal and Italy.

"If German and French politicians find it difficult to convince their voters to back a bailout of Greece, imagine the financial and political challenge if Spain and a few other countries land in trouble," Ahmed said.

Meanwhile, the overall jobless rate in the 16-member Euro area was unchanged in March at 10%, according to figures released Friday from Eurostat. That's the highest rate since at least 2000 and is up from 9.1% in March 2009.

In Germany, the region's largest economy, unemployment dipped to 7.3% last month from 7.4% in February. The unemployment rate in the Netherlands rose slightly to 4.1% from 4%, but remained the lowest of any country in the Euro area.

"The year over year trend is very clear," Weinberg wrote in a research report. "Unemployment is still rising in the euro zone."

Greece gets the word: Cut back, or no bailout