Oil industry frenemies band together to clean up the Horizon disaster 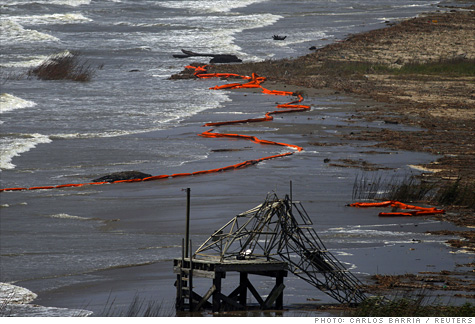 (Fortune) -- BP unleashed a financial and environmental disaster when Deepwater Horizon, the offshore drilling rig it leased from Swiss company Transocean, caught fire and finally sank in Gulf of Mexico on April 24. But BP and Transocean aren't the only oil companies scrambling to clean up after the disaster.

Some of the firms' fiercest competitors - including Chevron (CVX, Fortune 500), Exxon (XOM, Fortune 500) and Shell (RDSA) -are helping with the containment and cleanup efforts. This is not some deepwater do-goodery. Instead it's an effort to save the offshore drilling industry from a government-sponsored leashing in response to the tragedy.

"Right now we're trying to get as much help from as many different places as we can," says John Curry, the Director of External Affairs for BP in Houston. BP (BP) needs equipment to contain the spill, resources to identify the problem and brainpower from other companies. And it knows it can get all of that and more.

The fact is, that consumers don't distinguish between one oil driller and another. Gas is gas, no matter what the signs above the pump say and everyone gets tarred the same when something goes wrong. "Nobody is gloating," says Richard Sears, a scientist at MIT's Laboratory for Energy and the Environment, who worked for Shell for 33 years. "Nobody is taking any joy from BP's problem."

What's needed to control and stop the leak

Plus, unlike the mess at Toyota, say, every company in the industry knows that what happened here could hit them soon as well. Schadenfreude doesn't exist in off-shore drilling. Part of that mindset comes from the fact that everyone relies on the same equipment.

Almost every piece of machinery is rented, and most oil companies rely on the same set of companies. BP didn't own the Deepwater Horizon, Transocean (RIG) does. BP doesn't own the six remotely operated vehicles-ROVs-they're using for surveying the disaster and cleanup, either.

But in a crisis mode, "If you need an ROV, and they're under contract with somebody else, a lot of times that company will release that ROV from the contract," says Robin Rorick, the American Petroleum Institute's primary representative on oil spill issues.

The companies that are pitching in

So who is lending the biggest hand? ExxonMobil - no stranger to spills-announced it would donate two supply vessels, an underwater vehicle and support vessel, as well as experts to help work through the problem. Chevron is sending people who have experience with the blow out preventer-one of the devices that malfunctioned during the BP spill-and a portable marine wildlife rescue trailer. Shell sent six boats at the time of the disaster, and now is continuing to lend BP their experts.

Then there are the brains being lent, both in an effort to cap the gusher and to learn what to do should disaster strike their companies. "The oil companies are sending their best and their brightest down there to collaborate," says Rorick. BP's Curry says that teams onsite are working in 12-hour shifts to find solutions for engineering issues as they crop up. "They're really developing these in real time,"he says.

There's no formal protocol in place about reaching out to the big oil brain trust, says Rorick. And there's no official committee for the industry to contact in the event of a gigantic spill. However, he says, "experts within each company talk to each other all the time. It's reasonable to assume that something like this happens and they all pool together."

It's a survival thing for the offshore drilling industry

The spill could cause policy problems for companies that have rigs in the gulf and want to keep them drilling. There are 51 rigs in the Gulf Coast, and 29 of them are deep-water rigs below 6,000 feet, like the Horizon. Right now, all of them can drill. If they couldn't, oil companies would still be on the hook for anywhere from $300,000 to $600,000 per day per rig-depending on the size and type of rig-in rent to companies like Transocean. Any kind of policy that jeopardizes drilling would be a huge hit to the industry.

Oil bigs to Obama: Get real