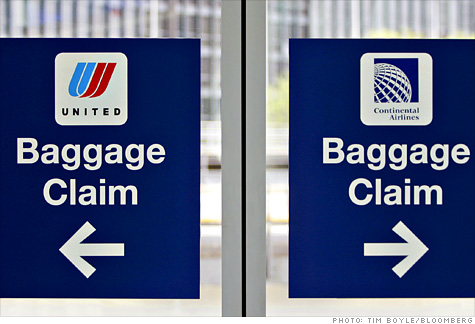 (Fortune) -- One would think that the merger of United and Continental airlines, a marriage that would create the world's largest carrier, would be enough to rouse shareholders knocked unconscious by years of losses. But while the companies' shares both gained more than 2% following Monday's announcement, the news still held all the excitement and economic potential of a two-family garage sale.

That's not to say that the airlines, and the industry overall, aren't in desperate need of consolidation should they ever hope to earn a consistent profit. It's just that the joining of two companies with rickety balance sheets, below-investment-grade bond ratings and a dubious history of making money is hardly the type of event that gets the investment world leaping from its Herman Miller chairs.

"It's not the kind of behemoth that it would have looked like 20 years ago," says Robert Poole, director of transportation policy at the non-partisan Reason Foundation. "Airlines are kind of has-beens."

That fact can be best told in the numbers: The combined airline's estimated post-merger market capitalization of $8 billion is 3% of Apple Computer's, based on Monday's close. Airlines as a whole lost $50 billion in the last decade. In this industry, mergers are more like a wounded man trading in one crutch for a pair: It'll be easier for him to get around, but he'll be no less hobbled.

Not surprisingly, given the industry's troubles, it's hard to imagine that even a more labor- and consumer-friendly Justice Department -- as opposed to the Bush-appointed crew that approved the Delta-Northwest merger in 2008 -- will put up much resistance to the United-Continental deal.

And that's not just because of the relative dearth of route overlap between the two airlines -- a grand total of seven routes in the third quarter of 2009, according to data provided by Oliver Wyman's planestats.com. The difficulty in shrinking capacity within the current industry structure argues heavily in favor of further concentration.

Industrywide capacity shrunk 8% from 2007 to 2009, but it was too little to offset cratering demand caused by the recession. Even with planes being parked in the desert, average airfares dropped approximately 8% during the same period, according to the BTS. "There in no pricing power. None," said industry analyst Vaughn Cordle of Washington, D.C.-based Airline Forecasts.

A marriage of convenience

So shouldn't this mega-merger be the kind of jolt that finally gives airlines the ability to raises prices (instead of just adding on ridiculous fees) and get out of the jam? It's one thing to take out a few seats; it's another to be able to rid yourself of planes en masse.

Well, not exactly. For one, airline mergers are notoriously tricky. The pilots of US Airways and America West, who merged in 2005, are still fighting over who has seniority.

And even a united United-Continental won't have that much sway. A decade ago, the major carriers controlled 80% of the market; by the end of this year it will be closer to 50% and Cordle sees it soon heading to 40%. Consolidation isn't about increasing power, it's about staying alive.

Cordle's firm estimates that without the merger, the five current legacy carriers -- Delta-Northwest, American, United, Continental and US Airways -- face $20 billion in additional costs by 2014 from rising fuel prices, airport facility charges and security and labor hikes. The United-Continental merger should allow those airlines alone to save $3 billion in such costs, he said.

Even one of the industry's low-cost competitors welcomes the merger. Virginia Gambale, a director at JetBlue, said the company is pleased with the deal, noting that the industry's fragile state and mercurial fortunes make it difficult to engage in long-term planning. "As we deal with less players in the market, it makes it easier to decide where and how we will compete," she said. "Uncertainty breeds its own inefficiency."

United and Continental CEOs on merger