The CBOE Volatility (VIX) index, or the VIX, was up 26% to 41.43, after rising as high as 42.15 earlier in the session. Investors remained nervous after Thursday's record swings, and stocks couldn't recover Friday. 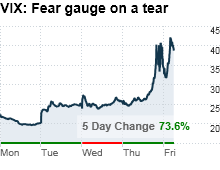 At the close of trade Friday, the Dow Jones industrial average (INDU) ended 140 points lower, after having gained as much as 59 points and lost as much as 279 points in the morning.

On Thursday, the VIX jumped as much as 63% before settling at 32.80, the highest level since May 4, 2009. Markets were rattled Thursday as the Dow Jones industrial average (INDU) plunged nearly 1,000 points before rebounding. Erroneous trading on nearly 300 stocks reportedly caused the "flash crash," which picked up speed as investor panic increased.

The fear gauge has risen 106.4% year-to-date, and it's up 87.9% over the past five days alone. Even before the Dow's record drop Thursday, stocks were struggling through the week on a slew of troubling news from the euro zone.

On Wednesday, rating agency Moody's placed Portugal's debt on review for a potential downgrade. That announcement came just one week after Standard & Poor's cut Portugal's rating, although it remains investment grade -- which means the country's debt can be still be used as collateral.

Major concerns about Greece also continued to fuel fears. On Wednesday, Greek authorities said three people had died in a central Athens fire during street riots protesting severe new government austerity measures. The major cuts are tied to the $146 billion aid package for Greece, which some investors worry won't be enough to contain problems from spreading throughout Europe.

Europe gets a case of Greek flu