Howard Marks: bonds are back in fashion 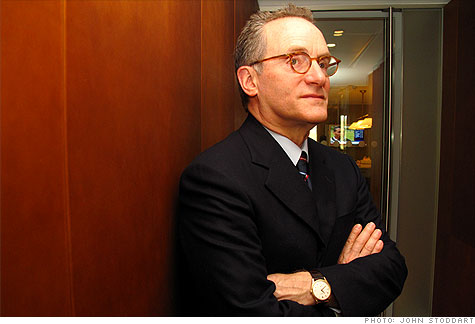 (Fortune) -- Since founding Oaktree Capital in L.A. in 1995, Howard Marks, 64, has built his institutional investment firm into a $76 billion powerhouse in high-yield bonds, distressed debt, and private equity. During the 2008 financial crisis he raised an unprecedented $10.9 billion fund to buy distressed assets -- a bet that has paid off richly for his investors. Admired for the folksy charm and astute commentary of his letters to investors, Marks shared his wisdom with Fortune's Mina Kimes.

Edited excerpts are below in an extended Q&A from Fortune magazine:

You mostly avoid the mainstream stock and bond markets. Why?

Some say the last two years were the buying opportunity of a lifetime for vulture investors. Are you still finding opportunities in distressed debt?

The biggest opportunities we found were in the excess of the buyout industry. Record amounts of equity capital flowed to buyout funds. Then they could take that capital and avail themselves of leverage very easily, with weak terms and low costs. That permitted them to buy great companies -- possibly the best companies that have ever been bought out -- but at high prices with high leverage. So when the assumptions that underlay those transactions weren't born out, you saw real disappointment. Companies had taken on debt they couldn't service. That's when we ramped up our activity.

That's still where we're looking, but there has been a very substantial recovery in the credit markets. You can't argue that things are as cheap as they used to be.

So the greatest opportunities have passed, and aren't likely to return anytime soon?

I think opportunities like this last one will recur, though probably not to the same extent and probably not for the same reason. Since we started doing this in the 1980s, this was our third episode like this. And there will be more, because people go to excess. It's the excessive booms that lead to the busts, and it's the busts that give us an opportunity to buy -- I don't think that will ever change.

You're an expert at taking advantage of market inefficiency. What mistakes do you see investors making now?

The biggest mistake is that the prices of many assets in our world -- i.e. the credit markets -- are back to 2007 levels. The prices assume a decent economic recovery. But if the recovery turns out to not be decent, there will be disappointments. John Kenneth Galbraith said there are two kinds of forecasters: the ones who don't know and the ones who don't know they don't know. I put myself in the former category. We don't have an economic forecast. But we're not counting on a high degree of prosperity in the years that lay immediately ahead.

So would you describe yourself as bearish?

Number one, that the economy is highly reliant on the government stimulus programs. What happens when they're withdrawn? Number two, the economy is reliant on artificially low interest rates. What happens when they rise to normal levels? Number three, there are still a lot of problems to be worked out in commercial real estate, and a lot of banks still hold a lot of commercial mortgages. Number four, the main source of energy in the economy over the prior twenty years has been the consumer, who did his part by spending more money than he made. Where does growth come from in the next five years if the consumer doesn't go back to doing so?

How big of a problem is commercial real estate?

I believe that something like 60% of all commercial properties changed hands at the top of the bubble, in late 2006 and early 2007. Let's say the average capitalization rate was 5%. That means the price was 20 times the net operating income. Today, net operating income is down and people won't pay 20 times that any more; maybe they'll pay 12 times. So the value of the building is cut in half, and it still has the same mortgage.

A lot of banks have mortgages on their books that they're going to lose money on. That's the main reason why the FDIC will see a few hundred more banks go under this year. I think real estate is far from being out of the woods.

High yield bonds have run up some 50% since the market bottomed. Has that ship sailed?

It doesn't take a brain surgeon to see we've gotten most of the returns. You're not going to have that again. The question is, are they fairly priced, overpriced, or underpriced? At this point, probably fairly.

So is it a matter of selectivity?

Selectivity is very important today. If you think about the virtues of an investment manager, what are they? Discipline, patience, selectivity, discernment. That's what you need going forward. You didn't need that last year, when things like discernment and selectivity held you back. You needed capital to invest and guts. Capital and guts are not the answer in 2010 and 2011. The biggest mistake you can make is to not notice that.

What advice would you give to the average investor right now?

You made a lot of money in 2009 and the first quarter of 2010. Now is the time to take stock. The people who were able to take on risk last year did very well. Now, most people have joined the party. You're not going to have incremental buying pushing prices up dramatically. The markets had a good first quarter, but not at the clip of 2009. So things have leveled out. Prices on most assets are roughly fair. Fear and greed are in balance today. Now is the time to assess where you really should be -- not where the government wants you to be, or where interest rates require you to be, but what's good for you based on a longer view.

Speaking of rebalancing, investors have been flooding bond funds for more than a year now. Given the probability of rising interest rates, are we looking at a bubble?

Market behavior is best understood as a pendulum. It's like hemlines: They go up and down, because that's all they can do. Things go in and out of fashion, and bonds are back in fashion.

What happened? We had the post-bubble collapse in 2000 and the crisis in 2008, and stocks didn't do so well, and bonds did better. Money has run into bonds, so their prices are up, and their yields are down. The other thing that's brought down bond yields is the fact that the interest rates on treasuries are so low. So today, even though there's a healthy spread between high yield bonds and treasuries, the absolute yield on high yield bonds is quite moderate. So interest rates are low, and bond yields have a long way to go on the upside, and not that far on the downside. The question of whether interest rates will go down or up in the near future isn't easy. But it's important to be conscious of the possibility that they'll rise.

Oaktree runs the Vanguard Convertible Securities fund, which is up nearly 40% over the last year. Are convertibles still a good bet?

What's your outlook for private equity?

Private equity -- by which I mean buyouts -- is historically reliant on financing. There's billions of dollars of equity capital in buyout funds today. That would normally require hundreds of billions of dollars in borrowings for leverage. I don't think that's available right now. I think that the buyout firms are going to have to be more resourceful. They can't just find a company, put in a little money, and borrow the rest. The former business model was pro-cyclical. It said you invest the most when you can borrow the most, and you borrow the most when the market is at its highs. But at the lows is when you should be buying.

Many hedge funds suffered huge outflows during the crisis. Will investors come back?

One of the things we learned about hedge funds during the crisis was that their open-endedness was a liability -- some were constrained from buying at the lows because they had to worry about outflows. They say cash is flowing back in. I would imagine that some managers are going to go for longer lock-ups this time, if they can get them.

You've long touted the importance of risk management. After the financial crisis, do you think Wall Street will change its ways?

Well it should, shouldn't it? One of the big lessons of the crisis was that people didn't worry enough. They weren't conscious of risk, and they didn't behave in a sufficiently cautious manner. You would think that the crisis would show people the errors of their ways. But it didn't last long enough for people's behavior to be lastingly changed. There's already some pro-risk behavior coming back.

When the government drops the rate of T-bills to 0.25%, it basically forces people to take more risk. The ultimate safe investment doesn't return anything anymore, so if you want to make any decent money you have to make riskier investments. That's one of the upshots of this government policy on rates.

How would you grade the government's handling of the crisis?

I think that the government did a lot of things that were very important and got most of them right. What would have happened if the government had not guaranteed commercial paper, money market funds, and bank borrowings, and had not pumped in liquidity? I think that extreme actions were called for, and I think that extreme actions were taken -- mostly correctly. This wasn't a test where the smartest kid in the class could get a 100. It was one where the smartest kid got a 70. Our leaders may have gotten something close to 70, which, on that curve, is an A.

What are your thoughts on financial regulation?

It's a very mixed picture. On one hand, it's clear that a lot of institutions made a lot of mistakes. It's not clear that regulation would have prevented that. The most regulated institutions -- the banks -- made the biggest mistakes. And what about hedge funds, which are unregulated? They had the fewest problems. To say that, if we just had more regulation, we'd solve these problems, you'd have to be knee-jerk pro-government. And I hope I'm not a knee-jerk anything.

On the other hand, I do think there were obviously regulatory failures, and there are probably ways in which regulation can be strengthened. But I don't think it can be strengthened to the point where it solves the problem, which is booms and busts. We'll always have cycles, because that's human nature.

A crazy day in the markets? Get used to it.