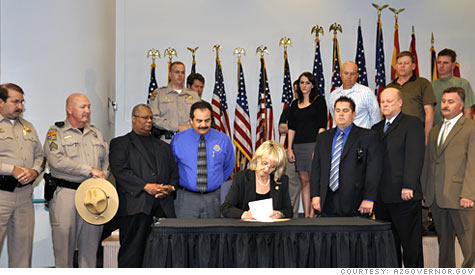 The Los Angeles city council voted 13-1 on Wednesday to boycott the state of Arizona, in protest of the state's controversial new immigration law. This could mean a loss of up to $56 million worth of business that the city conducts with Arizona each year, according to Gerry Miller, chief legislative analyst of Los Angeles.

This boycott includes suspending all travel to Arizona by municipal employees, as well as $7.7 million worth of city contracts with Arizona-based companies, such as Taser International (TASR).

"It's not going to cripple the economy, but when your economy is weak, you don't want to be losing any contracts," said Jim Rounds, senior economist with Elliot D. Pollack & Co., a real estate and economic consulting firm based in Scottsdale, Ariz.

He said that in reality the city council's boycott will probably only deny Arizona about $10 million worth of business. But he said that this, combined with an existing boycott on Arizona tourism, is an extra strain on a state that has already lost 10% of its jobs since the beginning of the recession.

"This thing is coming at a time when we're already struggling," said Rounds.

Arizona lost 82,200 jobs over the course of the year ending in March, according to the most recent figures from the U.S. Bureau of Labor Statistics. It's also the second-worst state for foreclosures; more than 163,000 properties there received foreclosure filings in 2009, according to RealtyTrac.

Gov. Janice Brewer of Arizona, who signed the immigration bill into law on April 23, called the boycott "thoughtless and harmful."

"An economic boycott against innocent people just adds to the massive economic burden Arizonans have sustained for years due to the federal government's failure to secure our borders," she said. "One example alone -- the unreimbursed costs paid by Arizona taxpayers to incarcerate convicted criminal aliens -- has cost Arizona taxpayers over $750 million just since 2003."

Paul Senseman, a spokesman for the governor, said the practicality of the boycott is "questionable," since the Constitution "specifically prohibits economic blockades by a state or city against another."

The Arizona legislation requires law enforcement agents to "determine the immigration status" of anyone under "reasonable suspicion" of being an illegal alien. In other words, the law provides state police with the power and responsibility that is normally accorded only to federal immigration authorities.

The Los Angeles city council said that the bill, which goes into effect in July, will "promote racial profiling, discrimination and harassment." The cities of San Francisco and Oakland, Calif. are also boycotting Arizona.

The bill's proponents are concerned about the increasing lawlessness of the border region, where a rancher was murdered in March. Rounds said that Arizona is being unfairly punished for trying to pick up the slack for the federal government, which hasn't done enough to deal with illegal immigration.

"I'm in support that border states need to do something, [though] it's unclear if the specific language in this bill was the best way of doing it," said Pollack economist Rounds. "Whether you're opposed to it or in favor of it, there's no denying that there's going to be economic consequences for Arizona in the next year."