Euro not out of the woods yet

NEW YORK (CNNMoney.com) -- Europe's bailout plan for Greece may have calmed market fears about the future of the euro, but there is still uncertainty about the long-term outlook for the struggling currency.

While the euro zone isn't likely to ditch the 11-year old common currency anytime soon, many believe that the bailout hasn't solved the underlying problem of imbalances between European nations. And critics of the common currency used by 329 million people across 16 nations argue that the euro is a major cause of those imbalances. 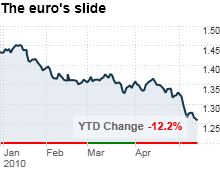 Even some euro supporters worry that the cost of the bailout will further weaken the value of the currency, which has tumbled 12% versus the dollar so far this year. The euro fell below the $1.25 mark Friday.

In an appearance at the London School of Economics Thursday, former Federal Reserve Chairman Paul Volcker said there is still a threat of the euro disintegrating. He cited the inherent problem of trying to manage a common currency that's not tied to one government or fiscal policy.

"I think Europe is going to have to decide in the end whether to get more integrated or get less integrated, in which case the euro comes into question," Volcker said.

Volcker added that the bailout deal reached over the weekend isn't a long-term solution.

"Europe was forced to react, and their first reaction was to buy time," he said. "If the time isn't used very constructively, it doesn't cure the problem."

Switching to the euro lowered borrowing costs for its member countries, allowing some to build up unmanageable levels of debt. Since poorer countries like Greece are no longer able to devalue their own currency to control the debt, they've been forced to impose harsh and unpopular austerity measures.

Joerg Bibow, economics professor at Skidmore College, said he's particularly worried about the popular unrest against the deal, and by extension, against the currency.

Protesters in Greece object to the austerity measurers, and there is a growing backlash against the deal in richer countries like Germany, where taxpayers resent having to foot the bill. Bibow sees this as a risk for the long-term future of the currency.

"Six months ago, I would have told you that given the amount of political capital invested in the euro, the governments would never give up, that they'll muddle through no matter what," he said. "But it may now come to a point where these anti-euro sentiments could get out of hand. It's really worrying."

One cost is that the euro is likely to continue to lose value versus the dollar, said Vassili Serebriakov, a currency strategist at Wells Fargo Bank. That will raise costs for European consumers and further slow economic growth moving forward.

"The environment remains very challenging, and the market is heavily biased against the euro," he said. "I think we'll see a weaker euro under most scenarios."

But no countries are fleeing the euro zone just yet.

Just this week the European Commission took a step toward adding a 17th nation to the euro when it ruled that Estonia had met the necessary financial conditions for inclusion in the euro zone. Eight other European Union countries are workings toward joining the euro zone. Only two members of the E.U., the United Kingdom and Denmark, have thus far declined to join.

European Commission President Juan Manuel Barroso made passing reference to the recent worries about the future of the currency in his announcement about Estonia's upcoming addition to the euro zone: "In all this debate, let's remember: nobody wants to leave the euro, and others are seeking to join."

Other experts say they doubt that any country, either rich or poor, will consider ditching the euro, despite the problems.

Jacob Kirkegaard, research fellow for the Peterson Institute, said Greece would lose more than it would gain by leaving the euro zone at this point.

"There can be no such thing as a huge export-led recovery in Greece; they don't make enough stuff that would benefit from a huge competitive devaluation," he said. "And if you leave the euro zone, it isn't something you can do overnight. In the period between when you announce it and when you can implement the new currency, you're going to have the mother of all capital flights out of Greece."

And he said that popular discontent with the bailout in the richer countries hasn't reached the point where citizens want to pull out of the E.U. altogether.

But he still sees damage to the euro from the current discontent.

"Rather than having a euro zone based on a positive vision, you have a euro zone held together by the prohibitively high cost of leaving," he said. "Politically that's a very large difference."

The hypocrisy of the Germans

Help Desk
Track testing tires to find the best
Find out how TireRack tests and reviews tires and why choosing the right ones for your car is so important. Play
Markets
Data as of 8:07am ET
Data as of 2:44pm ET
Sponsored by
Sponsors
Sections