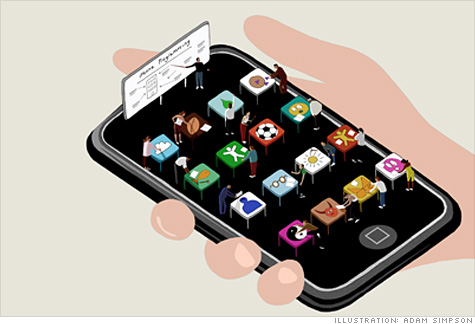 (Fortune) -- In most college classes, you get yelled at if you play with your cellphone. At the University of Maryland this semester, you're in trouble if you don't. That's because the school now dedicates an entire computer science course to iPhone programming. Taught by a visiting Apple engineer, CMSC498I is a twice-a-week series of practical lectures and labs; 25 students (all but two are men) learn to create basic apps that, for example, aid in navigating around campus or seeing local dining options. The course focuses on the iPhone, but its programming language will also apply to the new iPad, and its principles extend to other smartphones, like Google's (GOOD) Android devices. "The market has exploded," says UMD professor Adam Porter, who oversees the course, "and this class gives students the chance to work with cutting-edge technology."

The University of Maryland is one of several schools teaching apps technology. Stanford, in the heart of Silicon Valley and just up the freeway from Apple (AAPL, Fortune 500), has had oversubscribed courses since last year; its lectures are videotaped and available free on both iTunes and YouTube. The University of Washington's continuing-education evening class includes Boeing (BA, Fortune 500) engineers in their sixties, a pharmacist, and former savings-and-loan employees. The Royal Melbourne Institute of Technology has a course too. Once upon a time, if you were a computer major, you learned to program mainframes and then PCs; you aspired to be the next Bill Gates, developing code that might revolutionize an industry. Now a single-purpose app, like a silly program that fogs up the screen like a bathroom mirror, can net the author a fortune. Such gold rush possibilities make iPhone development a very enticing academic offering.

Porter says the challenge of smartphones is to treat them as more than small computers and to harness their mobile capacity. "The device always knows where it is," he says. So, for example, his students are working on an app called I Remember UMD that would create an ongoing time capsule. If you had met your future spouse at the library, you could note that spot, and others could learn of it when they walked by with their iPhones.

The class concentrates as much on aesthetics as utility. For one lab exercise, students competed to make the best onscreen soap bubbles -- which ones floated most realistically, which ones seemed to reflect light accurately. None of these courses are for novices. Syllabuses refer to such geekspeak as Xcode, Modal Views, and Interface Builder, with nary a mention of shoot-'em-up games; about the most exciting it gets is a wrap-up lecture at Stanford on "The Dark but Powerful Heart of Objective-C." That's a programming language, but you knew that.

Colleges hope the courses lead to useful campus apps. Apple declines to discuss any of its arrangements with various schools, but sources say the company provides its engineers free and is an easy partner. It's no wonder why. The company gets an early look at potential engineering talent. And if any apps ultimately make it to market, Apple, as always, gets its 30% cut of sales. Now that's investing in education.

Why universities should hate the iPad