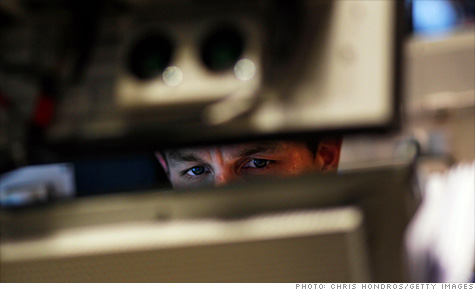 (Fortune) -- Introspection is a difficult task, even for the most self-assured among us. In fact, it can be most difficult precisely for the self-assured. It should come as no surprise, then, that the Wall Street crowd, never known to lack self-confidence, has emerged from the recent crisis with a self-regard that remains relatively unscathed.

In order to peer deep inside the mind of Wall Street, one need look no farther than the thoughts and opinions of Wall Streeters whose job it is to analyze themselves -- equity analysts who cover financial stocks and institutional investors who buy them. You might think that views on the quality of a system -- its business models, its regulatory framework --that brought the global economy to the brink might be open for change. That's not really the case.

A look at three reports issued on Monday show that those tasked with analyzing and/or buying and selling those companies that surprised us all with their capacity for self-destruction would prefer the status quo above all else. Remarkable, but true.

Consider Jason Goldberg, who covers mid-cap banks for Barclays Capital. In his May 24 note, he observed that "the market has not liked the recent uncertainty" surrounding regulatory reform. That's obviously quite true. But uncertainty over just how one's wings will be clipped is hardly the same as flying too close to the sun.

This is hardly as uncertain a time as 2007-2009, and the point of reform in Washington -- all politics aside -- does seem to be sincerely focused on increasing transparency in the banking system and restraining banks from taking risks they otherwise can't seem to stop themselves from taking. Speaking of which, what would an investor in Lehman Brothers or Bear Stearns make of the current "uncertainty?" They might not mind it when compared to the utter certainty of their equity wipeouts in 2008.

In almost all the self-analysis coming out of Wall Street, there is usually some commentary or another of how Washington overreach might destroy the competitiveness of U.S. financial institutions vis-à-vis their European competitors or -- God forbid! --harm the American consumer. On this count, Goldberg doesn't disappoint. If proposed legislation forcing banks to keep a piece of securitized loans on their own books comes to pass, Goldberg warns, it "could significantly reduce the securitization business and lending to consumers."

We beg to speculate otherwise. Consumers somehow found loans long before securitization was dreamed up in a Wall Street alchemy den, and we're sure they will keep finding them regardless.

In his contribution to the canon, Guy Moszkowski of Bank of America Merrill Lynch (BAC, Fortune 500) addresses the potential result of the controversial (but unlikely) component of reform legislation that would require banks to spin off their swaps businesses. He says such a result might have the unintended consequence of making "the system more, not less, risky." The nitty-gritty details aside -- and we're happy to entertain the idea that the separation is a bad idea for other reasons, including international competitiveness -- it's difficult to envision just what he means by "more" risky than what was effectively near-collapse.

On the subject of a new consumer protection agency, Moszkowski dryly points out that banks are concerned about having to "balance the requirements of yet another regulatory agency." Well, cry us a river. Jamie Dimon of JPMorgan Chase (JPM, Fortune 500) may indeed be right when he argues that the answer to this crisis is not another agency but better oversight from existing ones, but it's difficult to consider the opinions of the recidivist when wondering how to reform his oversight.

Finally, we come to Keith Horowitz of Citi Investment Research. In his own 49-page treatise, Horowitz reveals a paradoxically lax perspective emanating from investors in financial firms who were surely burned themselves by the likes of Bear, Citi (C, Fortune 500), Lehman, Merrill, and others. Indeed, a survey of the attendees at Citi's unintentionally humorously named "Beyond the Basics" conference -- shouldn't all these people stay focused on the basics for just a little while more? -- revealed that investors in these kinds of firms don't care about the past. What they want, and they want them unfettered, are firms that swing for the fences.

When asked what they were most concerned about right now, a full 43% answered regulatory reform. The closest issue of concern, at just over half that, was the euro debt crisis, at 24%, followed by the U.S. economy at 21%. Is reform really something to be "concerned" about? We wouldn't have thought so, but we would have thought wrong.

And the answer to the question, "Which large cap stock will provide the best return over the next 12 months?" Drum roll, please. Goldman Sachs (GS, Fortune 500). (Quelle surprise!) On the one hand, that makes total sense, given the pummeling the stock has taken in recent weeks. Recent controversy aside, though, it still shows that investors want the big score, and not the recently proven slow-and-steady-wins-the-race style of either Wells Fargo (WFC, Fortune 500) (just 5%!) or JPMorgan Chase (11%).

Horowitz also offers up the best he-said-it-with-a-straight-face remark of the week. "One negative of the current reform bill is its higher than average level of rule specificity," he wrote, "which gives regulators less leeway for interpretation in enforcement."

To that, we can only respond with a straight face of our own: Negative for whom?

One thing you can't blame Goldman for