What recession? Mining equipment is sold out until next year 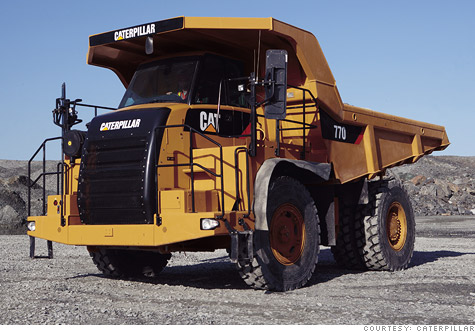 FORTUNE -- Metal prices have made spectacular rebounds since the start of the year on growing optimism about the world economy. It's not even midway through 2010 and Caterpillar (CAT, Fortune 500) has sold out of some of its largest mining vehicles because of rising commodity prices, and is now taking orders for 2011 delivery.

But the upward momentum has suddenly slowed. Though metals recovered some of their value this week, prices have generally dropped for the past several weeks due to uncertainties over the yuan in China and sovereign debt in Greece and throughout Europe.

Copper, used for electrical wiring and construction, was at $6,660 a ton Monday on the London Metal Exchange. Just last month, the metal briefly rose above $8,000 per ton - its highest level since August 2008. Similarly, nickel, mainly used to make steel, was at about $21,175 a ton - down from the near two-year high of around $25,000 per ton recorded earlier last month.

These dips might seem to suggest the recent metal frenzy is short-lived, but that's not entirely the case. Given the recent volatility of commodities and the markets in general, the choppy numbers are more likely to be just be a technical hiccup.

What will keep metals moving up -- and down

Prices certainly could fall further through September and possibly through the end of the year. But in the long-run, a few factors -- chiefly growing economies in East Asia and parts of Latin America -- will likely help metal prices onto a more steady upward path.

The declines of recent weeks have much to do with China's policy measures to ease inflation and cool growth. The country's money supply has expanded rapidly. Much of this is reflected by its booming property market, as well as rapidly rising prices paid by consumers and producers.

The government has passed tightening measures to temper inflation, including raising minimum mortgage rates and tightening controls on purchases of second and third properties. As construction cools, demand for steel, copper and other construction materials could shrink -- particularly since China alone is the world's largest steel producer and disproportionately consumes nearly one-third of the world's steel output.

In a global research report last week, Bank of America Merrill Lynch (BAC, Fortune 500) remained cautious on base metals, especially for the third quarter. In the coming weeks, players in the metals market will likely keep watch of China's policy measures and look hopefully for signs that problems in Europe are contained.

Industrial metals also took a hit following Greece's debt crisis. Concerns arose that other sovereigns with shaky finances, like Spain and Portugal, would be unable to access lending facilities. Despite a nearly $1 trillion package to bail Greece out of bankruptcy, fiscal deficits remain high and Eurozone governments must still tackle a host of structural issues. This has raised uncertainty over the strength of economic recovery.

Metal prices could also fall again if U.S. interest rates rise. An increase in rates effectively strengthens the value of the greenback. Since metals are denominated in US dollars, the stronger currency tends to push prices down.

On the horizon: growth will help prices recover

Over the next three to five years, prices are expected to bounce back reflecting the global recovery, said John Mothersole, a principal at IHS Global Insight. Growing economies, including China, India, Vietnam, Brazil and Mexico, are relatively well positioned to drive demand for industrial materials including metals.

"The pendulum will swing again," said Mothersole, adding that he does not foresee China's tightening policies as a long-term fixture in its economy.

Metals aren't likely to rise to levels seen prior to the global recession, when credit flowed much more widely (nickel reached an all-time high of $53,000 a ton in early 2007), but prices could stabilize as early as next year, with developing and emerging economies leading commodities upward. IHS has forecasted steady future growth in China, ranging from 8.6 percent in 2011 to 8.8 percent in 2014.

Also helping metal prices: A handful of countries are considering increasing taxes against the mining sector, which could reduce supply. Earlier this month, Australia announced plans to levy a 40 percent tax on mining profits, which have prompted mining companies to review projects in the country. Already, mining firm Xstrata has suspended copper exploration work in the country.

Meanwhile, India, Chile, Brazil and other economies big on metal exports are also weighing higher taxes. And Caterpillar is figuring out how to capitalize on the demand while it's still there -- along with pricing out the steel for all those humongous tractors they have to build this year, and next.