NEW YORK (CNNMoney.com) -- Treasury prices fell for a second day on Thursday as stocks soared and the euro firmed. 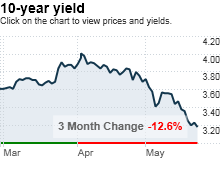 What's moving the market: Treasury prices were pressured Thursday as demand for riskier investments increased and stocks recovered losses from the previous session.

Treasurys are viewed as low-risk investments since they are backed by the U.S. government; therefore, they are particularly attractive during times of economic uncertainty.

Confidence in the euro zone was also boosted on Thursday and the euro strengthened versus the dollar after China's government called Wednesday's reports that it may reduce its holdings of euros "groundless."

"There's been some significant pickup in risk appetite today," said Kim Rupert, a fixed-income analyst at Action Economics. "Some of the fears that dogged the market late yesterday have been assuaged a bit, and that has revived confidence in the market."

In the last of the week's auctions, the Treasury Department auctioned $31 billion in 7-year notes on Thursday, receiving bids totaling $89 billion.

The Commerce Department said the economy didn't grow as much as originally reported, with the gross domestic product rising at an annual rate of 3% in the first quarter, compared with the 3.2% rate the government had previously announced.

Meanwhile, the Department of Labor said initial jobless claims fell to 460,000 last week from 474,000 in the previous week, beating the drop to 455,000 expected by economists.

Outlook: While Treasurys may pare losses as investors prepare for a long holiday weekend, trading is likely to remain volatile, she said.

"I think we're going to stay choppy," Rupert said. "Markets have been very vulnerable to news headlines, and I think we'll remain susceptible to this kind of trading pattern for some time."