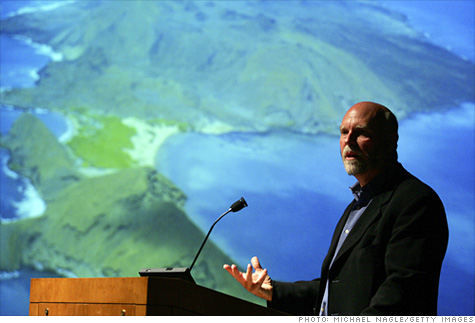 (Fortune) -- For years Craig Venter has attracted outsized attention and sometimes vitriol for challenging the status quo. Jealous scientific rivals have equated this maverick scientist, inventor and entrepreneur to Hitler, and Time magazine once described him as the "bad boy of science." Yours truly once compared him in a book to Dr. Faustus, the Renaissance physician who gave up his soul to the devil in exchange for receiving valuable scientific knowledge that incidentally made him rich and famous.

In recent years, Venter's cockiness has mellowed, and so has the critic's sting as his achievements have piled up and his out-of-the-box thinking has become a mainstay in prestigious scientific journals and in meetings from Davos to TED. Yet his work still incites the sort of over-the-top reaction that is rare for a scientist, and causes presidents, popes, and barons of business to take notice.

Last week, Venter and a team at the J. Craig Venter Institute in San Diego did it again when they revealed to the world a microbe brought to life by DNA they had painstakingly assembled in their lab. Venter described it in a press conference last week as: "the first self-replicating species we've had on the planet whose parent is a computer."

The bacteria -- dubbed "Synthia" by Venter -- couldn't do much more than survive and reproduce. But the proof of concept was there for a synthetic bug that Venter says will one day be programmable to churn out new drugs, bioengineered fuels, and vaccines, among other things.

As important as the microchip?

If true -- and there is no reason to think it's not -- this invention and others like it in the field of synthetic life could rival or surpass the invention of the internal combustion engine, or the microchip.

This is because cells in many ways operate like highly complex computers that until now have been programmed primarily by nature to allow certain inputs (food, chemicals, sunlight) to cause reactions that include making other chemicals and proteins. Human manipulation of this process has been producing products such as the anti-anemia drug erythropoietin since the 1980s.

Venter's method offers the promise for much more effective bioengineering -- which could be a force for good, but also could be dangerous if the technology falls into the wrong hands. Let's say a bioterrorist engineers a nefarious weapon, or, more likely, a bumbling scientist allows a bioengineered bug to get loose in the environment.

Venter insists that safeguards can be designed into the manufacturing process of synthetic cells, and that chemicals used to make the cells can be controlled -- presumably like bomb-grade uranium is supposed to be controlled.

The potential for harm caught the attention of President Obama last week.

Shortly after Venter published the Synthia study in Science magazine, Obama asked his bioethics commission to complete a six-month study on synthetic biology. The President said Venter's announcement raised "genuine concerns," but did not offer specifics.

Other reactions fell along predictable lines. Many scientists praised the Venter team for its ingenuity, while some insisted that there are less complicated ways to bioengineer organisms to make drugs and alternative fuels.

Ethicists and some environmentalists worried about the bugs escaping and causing havoc or evolving in unpredictable ways that might prove dangerous.

Not surprisingly, the biotech, pharma, and energy industries were pleased, though I wonder if they realize that this discovery could lead to the same situation faced by the horse and buggy industry a little over a century ago at the dawn of the automobile age.

For instance, big oil companies may find themselves scrambling to keep up with new super-plants grown in ponds or vats that churn out alternative fuels that rival petroleum for efficiency and cost -- and won't pollute the Gulf of Mexico. Big Pharma might also see new rivals appear -- just like Amgen (AMGN, Fortune 500) and Genentech emerged out of an earlier wave of biological innovation in the 1970s -- that will use synthetic organisms to manufacture safer and cheaper drugs that take less time to be tested and approved.

This all remains speculative and unlikely to cause any revolutionary changes anytime soon, but this is the promise offered by synthetic biology.

Executives of one traditional corporation had to be thrilled by the "birth" of Synthia. This would be Exxon Mobil (XOM, Fortune 500), which last year invested $600 million in Venter's company, Synthetic Genomics, to develop fuels from bioengineered algae.

An old nemesis from the days of the race to sequence the human genome, geneticist and Nobel laureate Sir John Sulston, has decried Venter's efforts to patent the processes around his "invention." "I hope very much these patents won't be accepted because they would bring genetic engineering under the control of the J. Craig Venter Institute. They would have a monopoly on a whole range of techniques," Sulston told the BBC.

More surprising was the response of the Vatican, which adamantly opposes embryonic stem cell research, but not necessarily genetic engineering. Last Friday, L'Osservatore Romano, the official newspaper of the Vatican, praised Venter's breakthrough, though they insisted in an editorial that it did not amount to the creation of life, but was merely "the replacement of one of its motors."

Venter has already put a personal stamp on Synthia by embedding in its DNA his own name and those of his team written in genetic code. The permanence of these names was assured in this proto-organism by being passed on to the bacteria's offspring.

One question that remains is whether this technique could be used one day to design complex organisms -- say, a human. This is likely decades away, if it ever occurs. Yet the possibility exists that this technology might allow a future Craig Venter, or even Venter himself, to create the first synthetic person, perhaps going by the name "Synventor."