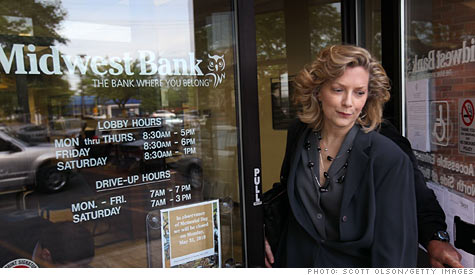 FORTUNE -- It might seem that the banking sector's bailout saga is nearing its close, leaving room to focus on other catastrophes like the European debt crisis or the Gulf oil spill, but some small banks across the country that benefited from TARP are still struggling to stay afloat, and many more will likely fail.

And while the Treasury Department and the Obama Administration have justifiably lauded TARP for preventing another catastrophic bank failure, the fact that hundreds of smaller TARP recipients are missing their dividend payments suggests that these banks should never have received government money to begin with.

Illinois-based Midwest Bank was the fourth, and latest, TARP recipient to fail on May 14, bringing the total taxpayer loss for the failures to over $2.6 billion. The FDIC stated in its quarterly banking profile last week that its list of problem banks had grown to 775 from 702 at the start of this year. And the office of the Special Inspector General for TARP (SIGTARP) reported in April that 104 TARP banks have missed at least one, and in some cases, several, dividend payments to the U.S. Treasury.

One bank, Saigon National of California, is dangerously close to missing six dividend payments, which would give the Treasury department the right to elect two directors to the bank's board. Roy Painter, Saigon's chief financial officer, explained to Fortune that the bank has not paid its TARP dividends because it has not received approval from the Office of the Comptroller of the Currency (OCC) to make the payments. While Painter declined to explain why the OCC has not granted approval, it is likely because Saigon, like the hundreds of other small TARP recipients, lacks sufficient capital.

And if that weren't enough, the OCC announced late last week that it had recently submitted enforcement actions against Citizens Commerce National Bank in Kentucky and First Community Bank in South Carolina, both TARP recipients.

Was every bank eligible?

But it turns out that several TARP recipient banks, including Midwest, were not otherwise healthy at all.

Midwest, which had over $3 billion in assets when it failed, had made a special arrangement with the Treasury department in March to swap the government's preferred shares in the bank for common shares at a loss to the Treasury and, ultimately, taxpayers. Midwest ended up failing before it raised enough capital to support the swap, resulting in an $84 million loss for taxpayers (taking its $824,000 in dividend payments into account).

Pacific Capital in California, Sterling Financial of Washington, and Independent Bank of Michigan, all TARP recipients, have made similar share swap arrangements with the Treasury. And all of these banks have missed one or more TARP dividend payments, a sign that these banks could be among the next to fail.

TARP was originally created as a direct response to a credit crisis brought on by the subprime mortgage crisis. But not all of the small banks that received bailout funds through the Capital Purchase Program came into dire straits as a result of the subprime mortgage-lending crisis -- many of them were failing due to their own mismanagement, having nothing to do with the credit crisis at all.

"Some of these smaller banks that have failed had to do with good old-fashioned poor underwriting, primarily construction loans," says Gerard Cassidy, managing director of equity research at RBC Capital Markets. "Unfortunately, thorough analysis was not done by Treasury."

In what has largely been viewed as a highly successful recovery program, the Treasury department has committed over $600 billion to 830 institutions through the $700 billion TARP program, and it has so far received over $23 billion in dividend payments, interest payments, and fees since it began to dole out TARP aid. Many banks opted to repay close to $189 billion in TARP funds early, largely to avoid the reputational costs associated with the bailout and its requirements like executive compensation restrictions.

As a result of the political turmoil surrounding some of the nation's largest banks, politicians and activists have come to the side of small banks. Some have even advocated for governments to transfer their assets from larger to smaller institutions as a symbol of solidarity with Main Street over Wall Street. And in some cases, elected officials have even made appeals to regulators on behalf of individual financial institutions.

ShoreBank, whose motto is "Let's change the world," focuses on providing financing to low-income communities, a politically palatable priority for elected officials and large banks with less than ideal public images. Although the bank has not received funds through TARP's Capital Purchase Program, it has received $9.4 million through its Making Home Affordable Program.

Meanwhile, legislators are considering the proposed Small Business Lending Fund, a $30 billion initiative that will allow banks to exchange their TARP shares for ones with a lower dividend rate if they increase their lending to small businesses. While the program's intentions are good, some wonder if it will have unintended negative consequences. As negligent banks wait for the program, they could choose to avoid their dividend payments, even if they have sufficient funds. There are no penalties for the first five missed payments.

"How good a deal the small banks are going to get has convinced some that maybe they don't want to get out of TARP so soon," says Linus Wilson, finance professor at University of Louisiana at Lafayette. "And the banks that don't take advantage will be in a worse competitive position."

The biggest banks have rightfully borne most of the blame for the financial crisis and the costly bailout. But as they emerge from it seemingly stronger than ever, it's the littlest TARP recipients that now have reason to worry.

Treasury cashes in on Wells