FORTUNE -- Robert Shiller, the innovative economist who helped create the S&P Case-Shiller Home Price indices, has been talking about the intersection between human behavior and markets for decades. His work there wasn't widely recognized, however, until the 2008 housing bust left us all wondering how the bubble ever got so big in the first place.

Residential real estate prices have stabilized, but the Yale professor isn't convinced we're out of the woods. He recently spoke with Fortune about why home prices could keep falling, and why some attitude adjustments bode well for the economy, but others could be trouble. 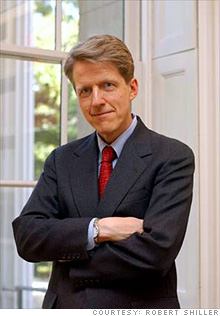 We're in our fourth year of home price declines. How much further can they fall?

Real home prices have not come down to their mid-1990s level. They're getting close to a bottom, but they could also overshoot, which often happens at the top and the bottom of a cycle. Unlike stocks, inertia and momentum play a big role in prices. So while we saw an upswing in prices concurrent with the government encouraging people to buy homes now, that upswing doesn't look that substantial relative to the massive downswing we just experienced.

I'm interested to see whether buyers are still active this summer, when prices normally rise, because I think that big downswing represents a larger change in attitudes toward housing.

What kind of change?

Real estate bubbles tend to be slow and they're driven by gradual changes in assumptions about the way the world works. If you go back 40 years the belief in real estate as a speculative investment is almost nonexistent except for in special places like Manhattan. That changed in the years leading up to 2005.

I've been working on a survey of homebuyers with Chip Case [with whom Shiller created the now widely used Case Shiller home price index]. We're finding that people are again less likely to think of a house as an investment as they were in 2005. The difference isn't night and day. There is still a widespread belief that housing is a great investment, that recent events were anomalies and that the crisis that began with the banks has been fixed. But there is a change happening.

The real question is whether we could have another price boom, which would derail this change in attitude. It surprised me how fast prices went up in some cities, like San Francisco. True, that is a glamorous city and people's imaginations run wild there with more regularity than other places, but the rebound happened very soon after the decline. I'm not predicting a boom. I'm just saying it's possible if there's no double-dip recession.

But isn't robust home price appreciation necessary to get our economy back on track?

What price appreciation creates is a strong wealth effect, but as long as there are enough other perceived investment opportunities the economy will do fine without a rapid rise in values.

Of course, this is why Japan becomes such an interesting case to study now. After its 1980s bubble, prices fell for 15 consecutive years in that country's largest cities, and lost almost two thirds of their real value. It was amazing that it went on for so long, but it reflected the cumulative effect of enduring economic weakness and the unwinding of a bubble that took place over many years. It's a plausible scenario for the U.S. as well.

Do the expanded roles of Fannie Mae and Freddie Mac in the mortgage market obscure the true state of the housing market?

The government has always used Fannie (FNM, Fortune 500) and Freddie (FRE, Fortune 500) to subsidize housing. They buy and guarantee mortgages, which keeps rates low; and they have come to represent the enduring American value of home ownership.

Their increasingly large role in the mortgage market isn't just making people wonder how much a mortgage should cost. People are increasingly asking why we subsidize home ownership anyway. What's so good about owning a home that the government provides this function? Plus the limits on what are considered "conforming mortgages" have been raised so high that we're subsidizing $900,000 McMansions. Why would we do that, and why would we want to teach people to expect extravagances to be subsidized?

It seems like after the past few years of bailouts, everyone wants the government to make life just like it was in 2006.

Perhaps, but this makes me worry about the way that people think about debt. There was a recent research paper that showed the moral obligation that people feel to pay their debts still exists, but that it's weakening at the margins. Free markets and entrepreneurship depend on basic moral values like repayment, so this could be a problem that people are in conflict about this.

It seems to a person on the street that big bankers didn't have to repay their debts because they were able to bribe the government to bail them out. This is making people very angry and could diminish that sense of moral responsibility that is so important for the success of the country. It also undermines the sense that in our society a rising tide should lift all boats.

When the poor are this unhappy it makes it politically impossible to support pro-growth policies because the voting population will not support any policy that threatens to leave some people behind and make others rich.