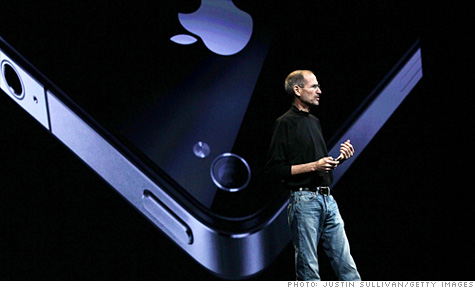 The new device, the iPhone 4, has about 100 new features that aren't available in the current iPhone 3GS. Some of the biggest changes include a higher-resolution screen, a better battery, a 5 megapixel HD photo and video camera, a gyroscope for improved rotation sensitivity and a thinner, more industrial look.

The iPhone 4 has been completely redesigned and is 24% thinner than the iPhone 3GS. Jobs called the new iPhone the "thinnest smart phone on the planet."

Apple's (AAPL, Fortune 500) new phone will go on sale in the United States June 24 -- $199 for a 16 gigabyte model and $299 for 32 GB model. That's the same pricing scheme and size availability currently offered for the iPhone 3GS. Starting June 24, an 8 GB iPhone 3GS will be available for $99, and the second-generation iPhone 3G will be discontinued.

The iPhone 4's biggest new feature, which Jobs saved for his famous "one more thing..." announcement, is the front-facing camera, which allows users to make video calls. Called "FaceTime," iPhone 4 users will be able to video chat with any other iPhone 4 user using Wi-Fi.

"I grew up with the Jetsons dreaming about video phones," said Jobs. "It's real now."

Jobs said the FaceTime feature won't be available over 3G this year, but Apple is working with its global mobile carriers to carry the feature over wireless networks in the future.

The other new features didn't disappoint. The screen's resolution has been vastly improved, displaying 326 pixels per inch, which is four times the resolution of the iPhone 3GS.

The new phone will give users the ability to talk for seven hours on one battery charge, up from five hours on the iPhone 3GS. The iPhone 4 will also let users record and edit video in HD, and it has the same ultra-fast A4 chip that operates the iPad.

Though this was the first time that Apple discussed its new device, images of a prototype were leaked by tech blog Gizmodo in April.

"A lot of you have already seen this," said Jobs, adding, "believe me, you ain't seen it."

When looking at the leaked photos, many wondered about the slits in the metal band surrounding the phone. Jobs revealed Monday that there are actually three separate bands, which serve as the new iPhone 4's antennas.

Jobs already unveiled the new phone's operating system in April, which on Monday, Apple redubbed "iOS 4." The new OS will be available for a free download to second-generation iPod Touch users and iPhone 3G and 3GS users June 21, and it will be automatically loaded onto the iPhone 4. It will allow multitasking, use of folders, access to Apple's iBooks app and the new "iAd" mobile advertising network, though not all of the functionality will be available on the iPhone 3G or the iPod Touch.

AT&T (T, Fortune 500) announced that it will allow any current iPhone customers whose contracts are set to expire at some point in 2010 to upgrade to the iPhone 4 early at no additional cost. But one announcement that many were hoping Jobs would make did not come: He said nothing about the iPhone coming to the Verizon Wireless (VZ, Fortune 500) network.

As for the iPad, which went on sale in early April, Jobs said Apple has sold over 2 million. In addition to the more than 200,000 iPhone apps that can run on the iPad, the company said there are now more than 8,500 native apps for the iPad.

For those who were wondering if the iPad's iBookstore could compete with Amazon.com's (AMZN, Fortune 500) Kindle, Apple's iBookstore has taken a 22% share of the e-books market in just two months, according to Jobs.

Later this month, Apple said many improvements will be made to iBooks, the iPad's e-reader application, including added control to the bookmark page, ability to view and read PDF files and the ability to make notes.

It had been rumored that Jobs would also unveil an update to Apple's Safari Web browser, a new Macintosh operating system, new Macs, an iTunes update that allows users to access their music on the Internet, and perhaps a new Apple TV device. But Jobs' keynote address concluded without mentioning any devices other than the iPad and the iPhone.