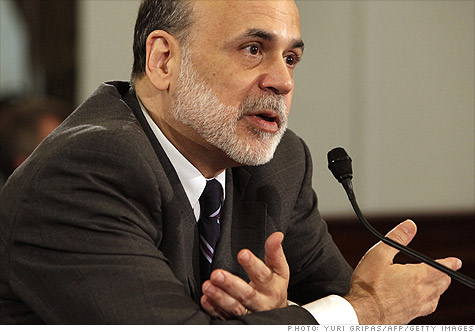 NEW YORK (CNNMoney.com) -- Federal Reserve Chairman Ben Bernanke told lawmakers on Wednesday that the U.S. economy should be able to withstand the effects of the European debt crisis.

But he warned that Washington policymakers still must make plans now to bring the nation's own debt issues into line.

"To avoid sharp, disruptive shifts in spending programs and tax policies in the future, and to retain the confidence of the public and the markets, we should be planning now how we will meet these looming budgetary challenges," he told members of the House Budget Committee. (Even Bernanke can't overlook deficits.)

The United States, unlike many countries with high debt levels, has some breathing room because "the United States [has] the favored safe-haven currency, a large diverse economy and a long history of paying our debts," Bernanke said. But he couldn't say how much breathing room.

Bernanke added that policymakers can help the economy grow and keep interest rates low by formulating a credible plan now for dealing with the debt in the future.

More broadly, Bernanke said the economy is still poised for recovery, even though it still faces a number of restraints -- such as continued pressure on state and local budgets -- and even as fiscal stimulus begins to wane.

"Although the support to economic growth from fiscal policy is likely to diminish in the coming year, the incoming data suggest that gains in private final demand will sustain the recovery in economic activity."

Nevertheless, returning to pre-recession levels of unemployment will not be quick, he added. "In all likelihood ... a significant amount of time will be required to restore the nearly 8.5 million jobs that were lost over 2008 and 2009."

Spurring economy vs. reducing the deficit

Democratic and Republican lawmakers made plain that they were looking for a referee to resolve the big fight on Capitol Hill: Should Congress focus more on spurring jobs and inject more fiscal stimulus into the economy or keep spending down in the interest of not adding to the deficit?

Bernanke's answer, in essence, was that it's not an either/or question.

"You have to do both," Bernanke said. Getting the timing right for each is key, he added.

In the short-term, he noted, the economic recovery is still fragile and big spending cuts or tax increases could be disruptive.

But, Bernanke said, more fiscal stimulus would be more effective if Congress also came up with an exit strategy that convinces markets the country's debt trajectory will improve over the medium- and long-term.

Coming to agreement on such a strategy won't be easy. Some Republicans have publicly stated that they won't support a fiscal sustainability plan that raises taxes, and some Democrats have been adamant that reductions in spending, especially in Social Security and Medicare, won't fly with them.

"I'd urge everybody to approach this with an open mind and look at all alternatives," Bernanke said.

Failing to come up with a plan that has sufficient buy-in from both sides could prove disastrous for the economy.

"If confidence is lost in our long-term fiscal stability ... we would see our interest rates go up ... And that would affect consumers' ability to buy homes and automobiles," Bernanke said. "It would slow our economy ... it would put pressure on the balance sheets of financial institutions.... And in the worst case would cause financial instability like we're seeing ... in Greece," he warned.

Double-dip recession: What are the odds?