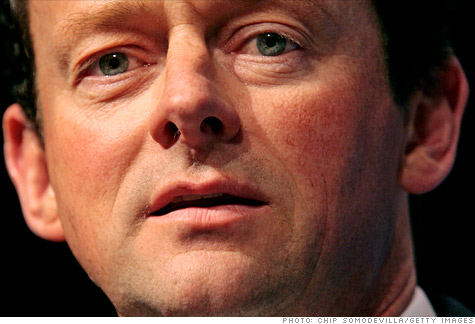 FORTUNE -- BP chief executive Tony Hayward is a little bit like vice president Joe Biden -- get him in an unscripted moment, and there's no telling what words will fly. Just months after taking over as CEO from predecessor Lord John Browne, he called BP's performance "dreadful," causing shares to plummet.

Three years later, with the Gulf Coast oil spill causing a public relations crisis, Hayward continues to make regrettable statements to the press. Perhaps the most cringe-inducing declaration was the one he made to reporters about how he'd like to have his life back. (He later apologized for that one.)

The fact that he's British could very well be a contributing factor to his poor reception in the US. His "I'm a Brit, I can take it" mentality isn't always appreciated by Americans who expect a certain amount of humility from disgraced CEOs.

Be prepared to laugh and cry. Here are Hayward's greatest gaffes over the past three years.

January 13, 2007
In one of Tony Hayward's first interviews after being named head of BP (BP), he said, "leaders must make the safety of all who work for them their top priority." He continued, "My enduring priorities are, firstly, continued improvement in the safety of our operations all around the world." This pledge, directed at the 2005 explosion of a Texas refinery and the leak of an Alaskan pipeline in 2006, ironically remains eerily pertinent to BP's current issues.

July 25, 2007
During his first month in charge after predecessor John Browne stepped down, Hayward reportedly said, "I'm Tony Hayward. John Browne was John Browne. I'll be me. There is not a lot more I can say." Hayward, tired of being asked how he'd do things differently from Browne said that these comparisons "are not helpful and frankly not relevant."

September 25, 2007
In an internal memo sent to the company's officials, Hayward called the company's structure flawed. He even remarked that BP's performance was "dreadful," leading to a dramatic drop in the company's value. He further explained, "There is massive duplication and lack of clarity of who does what." Analysts saw this as an attempt to separate himself from former BP CEO Browne's leadership.

April 29, 2010
After the Gulf Coast oil spill occurred, The New York Times reported that Hayward said to fellow BP executives, "What the hell did we do to deserve this?" Environmentalists and the families who lost loved ones in the explosion could ask the same question.

May 14, 2010
In one of his most famous gaffes, Hayward told The Guardian "the Gulf of Mexico is a very big ocean. The amount of volume of oil and dispersant we are putting into it is tiny in relation to the total water volume." With thousands of gallons pumping into the ocean every day, this small ratio of oil to water is taking a large toll.

May 18, 2010
"I think the environmental impact of this disaster is likely to be very, very modest," Hayward told reporters. That same day, when asked about whether he was able to sleep at night in light of the oil spill's disastrous effects, he replied, "Of course I can."

May 31, 2010
Hayward told reporters, "The first thing to say is I'm sorry." However, he continued, "We're sorry for the massive disruption it's caused their lives. There's no one who wants this over more than I do. I would like my life back."

He might just get his life back soon enough. That is, if he's fired. Hayward said a couple of weeks ago, "I don't feel my job is on the line, but of course that might change." President Barack Obama recently told the Today Show's Matt Lauer that he would have fired Hayward by now.

June 4, 2010
In his first interview with investors and analysts since the spill, the gaffe-prone executive didn't fail to deliver a one-liner for which he's become infamous. In response to his handling of the poor press, he said, "I'm a Brit, I can take it." This latest line won't improve his perception among Americans, or with anyone for that matter.