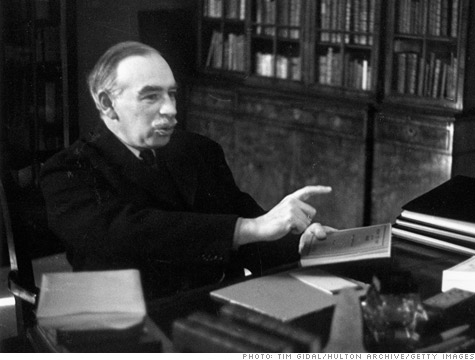 FORTUNE -- In the 1930s, British economist John Maynard Keynes spearheaded a revolution in economic thinking: The free market is imperfect. And because of these imperfections, it's the government's job to intervene and somehow make things right.

The global financial crisis ignited a resurgence in Keynesian thought -- specifically, the idea that government should spend big to pull out of a recession. But given Europe's sovereign debt crisis, is it time to ask where Keynes may have gone wrong? Or did European leaders misinterpret his teachings? And, given the growing complexity of the global financial system, are Keynes' ideas perhaps outdated?

Economic leaders are now questioning -- and in some cases challenging -- Keynes' general philosophy that more spending is better than less during economic downturns.

At a meeting last week in South Korea, the Group of 20 finance ministers and central bank governors, alarmed by the public finances of some countries, made clear that they could no longer wait until economies pick up steam before removing fiscal stimulus. This was a marked shift in tone. It was only about two months ago that G20 leaders called for ongoing support of expansionary fiscal policy until economies were growing stronger.

But too much public spending has proven unsustainable in parts of Europe. Government finances of Portugal, Italy, Ireland, Greece, Spain -- and now possibly Hungary -- are shaky. And despite a bailout of nearly $1 trillion to keep Greece afloat, global investors continue to worry about whether the region can contain its debt crisis and prevent a default.

Europe isn't the only one spooked by its public finances. Earlier this month, the surge in U.S. government spending helped push the national debt for the first time to a scary $13 trillion, which represents about 90% of GDP. Despite a $787 billion stimulus package, unemployment continues to hover near 10%.

The problems illustrate the limits of one of Keynes' core percepts -- that stimulus government spending would pay for itself. But now we've seen that a government that spends more doesn't necessarily gain more in tax revenue.

Keynes has long been a source of debate among economists and other academics. Keynesian economics served as a model during the later part of the Great Depression, World War II and the post-war economic expansion. It lost some influence in the 1970s when both the inflation rate and unemployment rate soared, but many world leaders in the wake of the financial crisis in 2007 referred to Keynesian economics as the basis for government stimulus programs.

Political economy professor Allan Meltzer of Carnegie Mellon University says doctrines of the revered economist have often been misinterpreted. For one, Keynes was not a big proponent of long-term structural debt. He thought government debt should be temporary and used as a way to stimulate the economy. What's more, the mistake many governments make applying Keynesian economics these days is to target spending on consumption rather than investment, which in turn, could spur steady job growth.

Take Europe's case. Since the 1980s, the region has grown slower than the United States. Unemployment in Europe ranged 8% to 10 %, while U.S. unemployment ran around 4%.

"They have not created many jobs -- why not? Because they're not spending in places to create jobs," Meltzer said in an interview with Fortune in February about how the Obama administration got Keynes wrong. Government spending in Europe has focused more education, health care and other expenses more helpful with stimulating consumption.

No doubt Keynes was brilliant, and he'll always be considered a legend. To many respected economists and policymakers, his philosophies on how the economy should work were accurate. But in many ways, it's worth wondering if the growing complexity of the global financial system may have caught up with the answers he developed decades ago.

"Keynes was too smart to make a mistake -- the problem is we live in a different environment," said Nassim Taleb, author of The Black Swan, which looks at the impacts of improbable events. Taleb added that with debt levels as high and problematic as they are in parts of Europe and the United States, accurate forecasting on indicators such as unemployment rates become more crucial.

Too often, forecasts have been wrong. Which makes Keynesian economics harder to follow in today's modern economy.

Why the 'rich' aren't feeling so rich