What if there's no fix for high unemployment? 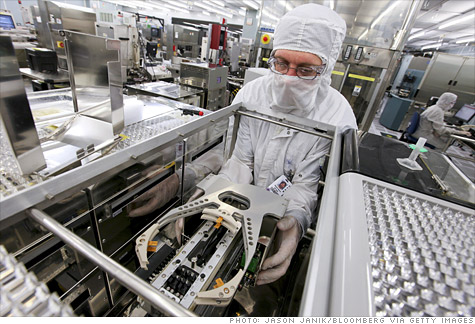 FORTUNE -- There seems to be little doubt that unemployment is going to remain stubbornly high -- quite possibly for years to come. There's also mounting evidence that a good part of that unemployment is really structural in nature: The skills and capabilities of many experienced workers are simply no longer demanded by the market.

In manufacturing and in many clerical and administrative occupations, computerization and automation have left many formerly middle-class workers with few viable career options. Is it possible that we're creating a future in which jobs are going to be harder and harder to create?

While most economists would probably acknowledge the role that advancing technology has played in the elimination of many middle-skill jobs, few, if any, seem prepared to give any serious thought to where that trend is likely to lead in the future. History shows clearly that the overall capability of information technology accelerates over time -- roughly doubling every two years according to the widely-accepted "Moore's Law." If that trend continues through the next decade -- and there is every reason to expect that it will -- we can anticipate that the computational power available to be focused on automating jobs of all types will increase by a factor of approximately 32. A change of that magnitude isn't something to take lightly. Imagine that your monthly mortgage payment increased by 32 times -- say from $2,000 to $64,000.

As technology continues to accelerate, the number and types of jobs that can be automated is certain to expand dramatically. It's not just factory workers that can be replaced by robots and machines: Rapidly improving software automation and specialized artificial intelligence applications will make knowledge worker and professional occupations requiring college educations and advanced skills increasingly vulnerable.

Consider that this month HP (HPQ, Fortune 500) announced thousands of layoffs while also touting that it's making investments in technology and automation to increase "efficiencies" in the years to come. It is far from the only company to have made such a pronouncement in recent years.

The unemployment pendulum could stop swinging

Yet even economists who think unemployment will be high for five or more years hold onto principled but ill-defended beliefs that unemployment will eventually return to normal levels, just because it always has. But what if this time, something's really different? Technology isn't going to stand still while we wait for the job market to recover. As jobs of all kinds get automated at an increasing pace, it may turn out to be extraordinarily difficult to find our way back to an acceptable unemployment rate.

Skeptics will rush to point out that while advancing technology eliminates jobs, it also creates new opportunities and new employment sectors -- so there should be plenty of new jobs to pick up the slack. This process of "creative destruction" is indeed inevitable, but the reality is that innovation often wipes out jobs in more traditional, labor-intensive industries, while creating new ventures that rely heavily on advanced technology and employ only a few people.

Consider Blockbuster (BBI, Fortune 500), which employs a large workforce at thousands of retail stores. Compare it with Netflix (NFLX), with a much smaller number of employees in a just a few highly automated distribution centers where DVDs get sent out and received. That's not all though: The trend is relentless. Netflix customers are already able to stream video directly to their computers or televisions, and there can be little doubt that the Internet is going to be the way movies get delivered in the future. Guess what that means for the workers who are now shipping DVDs through the mail?

Automation is going to hit every industry

As both hardware and software evolve, virtually every employment sector will be increasingly -- and simultaneously -- susceptible to automation. That's a very different story from past technological advances. In the last century, mechanization destroyed millions of jobs in agriculture, and that resulted in a transition to factory-based employment.

More recently, manufacturing automation and globalization were the forces behind our shift to a service-based economy. This time around, we're unlikely to have the luxury of such a sector-by-sector impact on employment: Automation is going to hit hard nearly everywhere.

If structural unemployment increases, there will be very few safe harbors. Today, workers whose skills become obsolete often end up in the jobs of last resort: low-wage service positions at employers like Wal-Mart. The problem is that those jobs won't be there forever -- and certainly not in the numbers required to sustain us.

Wal-Mart (WMT, Fortune 500) for example, is one of the biggest proponents of RFID, an inventory tracking technology which reduces the need for human supply-chain management. (It was also once reported to be considering using robots to perform nightly store inventory, a claim the company has denied.) As automation technology becomes more capable and more cost-effective, its eventual introduction into the retail stores, warehouses and offices that now employ tens of millions of workers is inevitable.

Increasing unemployment and falling consumer confidence would very likely result in stagnant or even falling aggregate demand, raising the risk of a deflationary spiral that might be very difficult to reverse. Social safety nets like unemployment insurance would come under unprecedented pressure, and governments would see dramatically increased demand for services even as tax revenues plummeted. Governments would have little choice except to borrow even more -- making the sovereign debt problems that are already tormenting the developed world just the tip of the iceberg.

The solutions to this mess are politically unthinkable by today's standards. Think about it: Jobs are the primary way that purchasing power gets delivered into the hands of consumers. Consumers without incomes can't drive the economy. If jobs at all levels are destined to evaporate in the face of broad-based automation, radical intervention -- and perhaps even a fundamental rewiring of the way the economy works -- may ultimately be our only alternative.

Mainstream economists are, of course, completely oblivious to such a potential scenario. They remain confident in elaborate mathematical models and assumptions that were put together in the last century -- often on the basis of economic data collected decades ago, when information technology was still in its infancy. What if those assumptions turn out to be just plain wrong?

--Martin Ford is a Silicon Valley entrepreneur and author of The Lights in the Tunnel: Automation, Accelerating Technology and the Economy of the Future.

OECD: joblessness on the horizon

How to hire, fire, and inspire Deli-style