Got guts? What to expect from GM's IPO 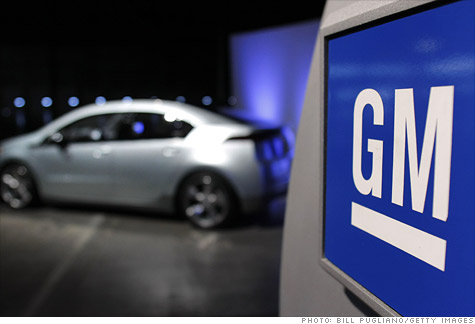 FORTUNE -- Is it worth buying when your government is selling? That will be a big question when the colossal, and once colossally troubled, General Motors finally has its coming out party, which could occur as early as the end of this year.

The question became timely when news leaked on Friday, stating that General Motors had chosen Morgan Stanley (MS, Fortune 500) and JPMorgan Chase (JPM, Fortune 500) as the prospective underwriters for the deal, which could top $10 billion and mark the first major IPO to hit the market since Visa went public in March 2008.

Although GM's major shareholder, the United States Treasury, could always deny the selections, there is no indication it will do anything other than squeeze the underwriters to vastly reduce their fees for handling the sale. These fees could be the "lowest ever," notes William Smith, whose Smith Asset Management previously owned GM shares but who no longer follows the company.

Given that these banks were also windfall beneficiaries of government largess, cut-rate fees would seem appropriate. But Treasury better hope it still gets full-fare treatment from the investment banks, because selling investors on GM -- still known to many as "Government Motors" -- could be as hard as pitching a new GM car to once loyal customers.

Investors will recall the shellacking so recently received by owners of the old GM, with stockholders virtually wiped out and many bondholders in GM's bankruptcy forced to accept tiny or inequitable recoveries. That's not to say that investors can't get over previous hurt feelings or develop some patriotic flourish, if the price is right. But a good deal for the US government -- and in extension the US taxpayer -- may not be so appealing to potential investors putting new skin in the game.

Is GM worth more than Ford?

As with any insider, the US government, which holds a stake in GM worth more than $42 billion, obviously would like to maximize its profit, or at least minimize its loss. By extrapolating from current pricing on existing GM bonds, Eric Selle, a debt analyst at JPMorgan, has calculated that investors might support a GM market capitalization of somewhere between $70 billion and $90 billion, potentially providing the US government with a tidy profit.

Such a valuation would be a significant premium to its more profitable rival Ford, which is worth about $40 billion today. But analysts say GM can justify a higher multiple to cash flow due to the company's much lighter debt load and its recent operational improvements.

GM has made major strides since entering bankruptcy in June 2009. Last month the car company beat analysts' estimates when it announced that it had earned $865 million in the first quarter. The numbers were helped by GM's ability to get incentive-happy auto buyers and by an increase in global sales, including important emerging markets like China. This is an improvement from the same quarter last year when GM lost $6 billion. Over the last five years, GM has lost about $80 billion.

In many ways, GM rode a tide that lifted all boats, and one that could continue to aid the entire automotive sector. Efraim Levy, an auto analyst at Standard & Poor's Equity Group, believes the industry bottomed in the second quarter of 2009 and he projects strong overall growth in car sales in China, India, most of Asia and in parts of Latin America. "We are in a bull market for automotive demand," says Levy. "The world is wealthier, there is more demand for vehicles and this will help automakers."

But GM also benefitted from its near-death experience in 2009. Following a $6.7 billion U.S. government loan, union concessions and a contentious bankruptcy, GM cut more than $45 billion from its debt noose, brought its multitude of brands down to a manageable four in size and began trimming its sprawling dealer network. It improved its car design and worked to optimize its manufacturing.

"What previous management did and what was accomplished in bankruptcy is one of the most dramatic transformations of any company in American industrial history," notes William J. Holstein, the author of Why G.M. Matters: Inside the Race to Transform an American Icon.

That doesn't mean GM is out of the woods. While GM may be "on the comeback trail," Holstein also says that the dealer network remains underinvested and too sprawling, and that the company's marketing "has yet to prove that it can fire a thirst for GM's undeniably improved vehicles."

GM has long struggled with the perception that its cars were clunkers. Although the first quarter's warranty payments dropped to about $821 million, or 10% compared with a year ago, consumers have been reluctant to believe quality has improved.

The most recent biannual "perceived quality survey" by Automotive Lease Guide (ALG), an automotive consultancy, showed some GM brands like Chevrolet with scores over 50, and the standout Buick topping 57. But that still doesn't come close to competitors like Honda (HMC), Nissan (NSANF), or Ford's (F, Fortune 500) trucks, which reached scores greater than 70. Even Toyota (TOYOF), which is in the midst of a brutal publicity-battering recall, still beats GM's brands with a ranking of 67.6.

Also, GM's recent profit may not be as rosy as it seems. The company benefitted from a bankruptcy gift of $863 million, the amount of interest expense it no longer had to pay on its old debt. And its stellar U.S. sales figures -- 212,800 units in May -- was largely driven by fleet customers, such as car rental agencies and government buyers, who accounted for 38% of the purchases, according to Edmunds.com. The number of retail consumers actually fell in May, and those that bought were still being enticed by pretty hefty profit-squeezing incentives, including 0% financing. Going forward, Morningstar automotive equity analyst David Whiston, who is generally positive about GM's cost structure and its product line, such as the new Chevy Cruze, adds that GM will still face headwinds in Europe; Germany has so far rejected GM's plea for economic aid at its struggling Opel unit, for instance. Also, GM's prosperity could be nicked by tough UAW negotiations scheduled next fall.

The entire sector would be squeezed if commodity prices keep moving higher, if credit doesn't continue to loosen, if unemployment refuses to fall or if economic growth projections prove too optimistic.

The new GM may have a brighter future than the legacy GM left on the bankruptcy heap. But for those looking to buy in, value could be increased if political expediency made the US government a more motivated seller, if GM was knocked from what Whiston calls its current "sweet spot," or if GM's boosters turned more tepid.

Also, with recent IPOs performing somewhat poorly, investors could be rewarded by some guarded patience. As Holstein notes, GM "could be very attractive in five years. Everything just depends on where it is priced."