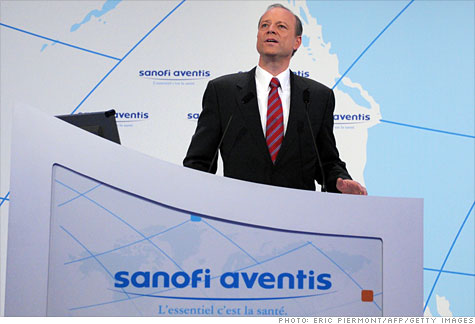 FORTUNE -- Faced with looming patent expirations on its biggest products and a withering pipeline of new drugs, Sanofi Aventis was in trouble when Chris Viehbacher became CEO in December 2008. Shares of the French drug giant had dropped some 20% since it was formed in 2004 by a merger between Sanofi-Synthelabo and Aventis, vastly underperforming rivals Bristol Myers-Squibb and GlaxoSmithKline.

Sanofi (SNY) is still grappling with massive patent cliffs -- but, with 12 new drugs and vaccines in late-stage development, its outlook is a lot less grim. That's largely due to changes implemented by Viehbacher, a German Canadian who is the company's first ever non-French CEO. Viehbacher has restructured Sanofi's R&D efforts, stepped up acquisitions, and formed new partnerships with innovative biotech companies and universities. He updated Fortune on his turnaround plan:

When you arrived at Sanofi, the company was going through a rough patch. What went wrong?

Some of the situation was general to the industry and some was specific to Sanofi-Aventis. We've got an industry that, over the last ten years, hasn't done enough to come up with medicines. And we've got a lost decade in terms of shareholder value. We did a lot of mergers, a lot of cost cutting, but, largely, the industry wasn't going anywhere.

Sanofi was the slowest to recognize that the world was changing and we needed to move on. It was a company that was living in its own walls, and hadn't really done much to build new partnerships and licensing agreements. It was certainly not communicating with the investing community about how to deal with the patent cliff.

What have you done in the last year to fix those problems?

When you become CEO of one of those big companies with 100,000 people, you can get caught up in a whole bunch of things. I decided I was going to focus 99% of my attention on three: rebuilding R&D productivity, pursuing external growth strategies with the 4 billion euro of cash flow and dividends we have each year, and transforming the business away from mega blockbusters to businesses that were more global, diversified, and, above all, more sustainable.

Sanofi has struggled to devise new drugs in recent years. How have you changed your approach to research and development?

Big Pharma does some things well: anything that has to do with deep competencies, huge resource requirements, doing clinical studies on a global scale. But anything that around the creative process of innovation, we're not so good at.

We've gone out and developed a network of projects. We've bought companies like BiPar, which gave us a PARP inhibitor for triple negative breast cancer. We've also struck strategic relationships with the Salk Institute, Hopkins, CalTech, and MIT. We're creating a network for partnerships, not just a hub and spokes. The traditional model is, we go to a biotech and say, we'll take your product, develop it, and pay you a royalty. Now we get our people to work with their people. And the partners are starting to work with each other. To be able to fund that, we took a hard look at our own internal pipeline. We did our equivalent of the banks' stress tests on our own portfolio and cut 30% of it.

How did investors react?

The share price went up that day. Most people wondered why the heck we were investing in some of those projects to begin with.

Since you became CEO, Sanofi had done 43 deals, spending about $8 billion last year. Are you going to continue at that pace?

We plan on doing a similar level of activity this year.

Where are you looking?

We want to be in businesses that have longer term potential, but where we have a competitive advantage. One of those is vaccines. To give you an idea of the barriers to entry: We have a dengue fever vaccine that will launch some time after 2012. It takes five years to build a plant, which costs $500 million--to produce one vaccine.

Look at any pharmaceutical company, and 80% of its sales are in Europe, the U.S., and Japan. The total population of those countries is about one billion-but there are 6.7 billion people in the planet. We bought a branded generics company called Medley in Brazil last year, cementing our number one position there. We made a similar acquisition in Eastern Europe, with Zentiva. A couple weeks ago, we signed an agreement with a Japanese company, Nichi-iko, to enter the generics market in Japan. With the joint venture, we can sell Medley and Zentiva products in Japan.

How many opportunities like that are still out there?

In China, there are 4,000 pharmaceutical companies. There are quite a lot of opportunities out there.

What about mega mergers?

Been there, done that-twice. That's part of the reason why [the industry] screwed up R&D. We ended up with these big R&D organizations and didn't really give enough thought to what drives innovation. I wouldn't criticize them entirely, but they were a failure from a shareholder value point of view.

There comes a point, I think, where getting bigger is not going to be a solution. You have to really go back and fix the whole R&D thing. You have to fundamentally ask: what is the human aspect of innovation, and what kind of conditions do you need to encourage that?

It will be a leader in vaccines and consumer products. It will have one of the top performing R&D organizations, but also be committed to access to medicine no matter what your income.

A lot of the fields you're interested in-vaccines, emerging markets, consumer health-are being pursued by other Big Pharma companies. What makes Sanofi different?

Execution. That's what it always is.

First, not everyone is going down that path; some are sticking with the old model. Second, we're better placed in a lot of these things. You may want to be in vaccines, but if you aren't already in vaccines, it's going to be very hard for you to get into them.

India and China are as different as two countries can be on the planet. There's an awful lot of local understanding-building up management and manufacturing capability. We didn't get rid of a lot of products back when people were saying, let's get rid of underperformers. So we have this huge range of products that, curiously enough, is giving us a strategic advantage in many of those countries today.