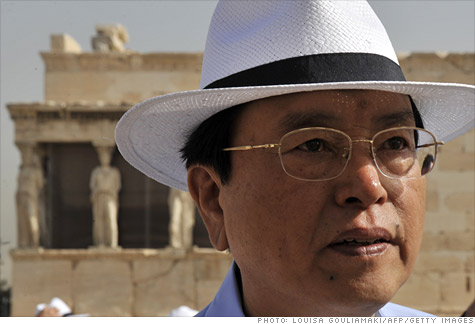 FORTUNE -- China is hunting for bargains in some unlikely corners of the world. Earlier this week, it opened its checkbook to make 14 commercial investments inside Greece, which is struggling to avoid defaulting on its mounting debt.

China's vice premier Zhang Dejiang signed off on each contract, securing deals in major industries such as telecommunications, real estate and shipping during his four-day visit to Greece, which began on Monday.

Among the contracts signed was a $123 million contract between Helios Plaza and BCEGI, a Chinese real estate company intent on developing a hotel and commercial complex for tourism in Piraeus, Athen's largest port town. Huawei Technologies, a Chinese telecom solutions provider, also inked a deal with Hellenic Telecommunications Organization SA. The company will equip the tourism complex BCEGI is financing.

Chinese investments in Europe have been relatively insignificant in recent years. But its deals with Greece paint a new picture of China's financial landscaping. According to Greek officials, the 14 deals signed this week mark China's largest foray into investment in Europe. And there will likely be many more to come.

China's brokered deals with Greece point to its ulterior power playing and market building strategy. It is getting in on the cheap in a region that's economically depressed and at the same time, it's purchasing a favorable reputation in Europe and around the world. It is making a stealthy land grab.

Stakes all over the world

With the global economy muddled in a sluggish recovery, few governments have been out to shop and invest. China, however, has gone forward to wine, dine, and conquer market shares that some Western nations deem insignificant or even scoff at -- Greece is just one example.

In the past five years, China has made other market building bargains in otherwise overlooked countries, including Costa Rica, Sudan and Zimbabwe. While the United States is heavily financing the war in Iraq and Afghanistan, China is taking advantage of U.S. security there and negotiating oil field contracts and managing the Anyak copper mine, home to one of the largest deposits of the metal in the world.

China's deals with smaller countries might strike some as surprising, or even insignificant. But in those parts of the world, the impact can be significant. Costa Rica and Taiwan broke diplomatic ties after 60 years in 2007 when the small Central American country welcomed China's interest in trade and investment. China has donated $83 million to Costa Rica to assist the country in building the Costa Rica National Stadium.

Some experts say that the recent multibillion-dollar China-Greece contracts are merely part of the country's global growth strategy, although it's surprising they haven't garnered more attention.

"It's nothing new," says Richard Lee, a foreign exchange trader for a global macro fund who wrote about the deals at The Daily Reckoning. "What's really unique about it is that it's covert. If the U.S. had these deals, if Russia had these deals, people would be talking about it." Lee cited China's recent promise to lend Venezuela $20 billion in exchange for crude oil as another example.

Indeed, because of its discretion, it is difficult to map China's ever-expanding land grabs.

But it's not something that should be ignored, since it's becoming increasingly difficult to determine where China's business interests begin and its government interests end.

"The big story is that the Chinese government and its business capital are all intertwined, with the Chinese Communist Party appointing many heads of corporations and banks," says Clayton Dube, Associate Director of the U.S.-China Institute at the University of Southern California.

Will it pay off? China obviously sees opportunity where others see risk. For both the Chinese government and businesses, easing Greece's commercial vulnerability is an opportunity for China to gain praise, trust and recognition. If China succeeds, says Dr. Cheng Li, Director of Research and senior fellow at the John L. Thornton China Center of the Brookings Institution, it will open the door to a larger European market full of opportunities.

Europe better prepare itself. "It will see China in a new light," says Cheng.