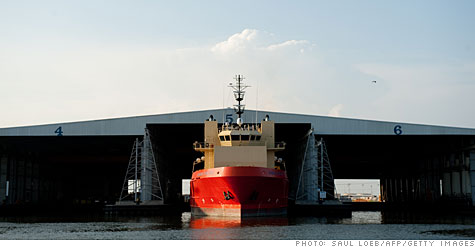 A large supply ship, the Andrea Chouest, sits in the boat slip at Port Fourchon, La. By Steve Hargreaves, senior writerJune 24, 2010: 10:06 AM ET

NEW YORK (CNNMoney.com) -- There are as many as 10,000 people that work on deepwater oil rigs in the Gulf of Mexico. These are jobs that could soon begin to disappear because of the temporary ban on such drilling.

But not only those jobs are at stake. From helicopter pilots to offshore catering chefs, another 25,000 jobs could be affected by the six-month ban imposed by President Obama while the investigation into the BP accident is underway, according to David Dismukes, a professor at Louisiana State University's Center for Energy Studies.

Sailors: All those offshore drill rigs require constant resupply. Each rig usually has at least 2 or 3 boats that ferry materials non-stop, said Jim Noe, an executive at Hercules Offshore, a Texas-based drilling company.

The boats carry drilling pipe, cement, lubricants, fuel and other materials to the rigs. They also bring the crews supplies such as food and water out to the rigs.

The helicopters bring out employees in time-sensitive positions as well as materials. They serve rigs not easily accessible by boat, and are used for emergency evacuations in the event, say, of a hurricane.

Chefs: Some rigs use on-board chefs, and others rely on caterers to provide meals for the crews.

Construction workers: Fabrication yards dot the Gulf Coast. They make and service not only the boats and rigs, but the various items found on them including cranes, winches and moorings.

"A rig is like a mini-factory," said Noe. "You need constant parts and repairs and services."

Port workers: The ferrying of personnel and goods has to leave from somewhere. So manning the docks and wharfs, as well as providing the refueling and repair work, is big business.

"In some of these port towns, that's all there is," said Noe.

Cleaning staff: With constant exposure to mud, salt water and grease, drilling can be a dirty business. Someone's got to keep the things clean.

The debate: Economy vs. safety

The temporary ban on deepwater drilling was overturned by a judge on Tuesday, but remains in place as the Obama administration appeals.

All told, the ban could cost local economies between $3 billion and $5 billion a year, said Dismukes.

In theory, the ban affects only the drilling of new wells in water over 500 feet deep -- but shallow water drillers say they haven't been issued any new permits since the BP disaster either. The ban does not impact any current oil production, which comes from existing wells.

The oil industry is hoping to resume deepwater drilling as fast as possible.

"We think the moratorium is too much," said American Petroleum Institute president Jack Gerard, noting that additional safety inspections have been performed on all the offshore rigs since the BP spill, and that this was the Gulf's first major accident in decades of drilling. "Our country requires oil and gas from the Gulf."

But others say wait -- at least until the causes of the BP (BP) spill are known.

"The decision to lift the moratorium trades oil industry profits for the safety of offshore workers, the long term health of the Gulf coast economy, and the environment," the Center for Biological Diversity said Tuesday in a statement.

Oil spill victims get a break on mortgage payments