NEW YORK (CNNMoney.com) -- The dollar rose against the euro Friday ahead of the G-20 policy meeting and after a disappointing report on growth reinforced worries about the economic recovery. 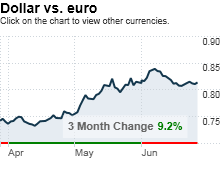 It's been a choppy week for the dollar. The U.S. currency started the week higher, gaining as investors realized China's move to let its currency more freely would be gradual.

But after the Federal Reserve kept its interest rate policy unchanged on Wednesday, the greenback lost ground and turned mixed by the end of the week as economic data failed to restore investors' confidence in the health of the economy.

What's moving the market: On Friday, investors turned their focus to this weekend's G-20 economic summit, where President Obama and other world leaders will meet in Toronto to discuss global economic conditions.

"Market nervousness and risk aversion ahead of the G-20 meeting are on the increase," said analysts at BNP Paribas in a research note.

"There appears to be a split opening up with the U.S. pushing for pro-growth strategies while the Europeans are more focused on deficit reduction, suggesting that the G-20 statement may not be as supportive for risk appetite as originally anticipated," he added.

A report on gross domestic product (GDP) showed that U.S. economic growth for the first three months of the year was revised lower to an annual rate of 2.7% from a previous reading of 3%. Economists had expected growth to remain unchanged at 3%.

The University of Michigan's final reading on consumer sentiment for June rose to 76 from 73.6 in May, beating expectations of an increase to 75.5.

What will the G-20 do?
Track 17 major currencies