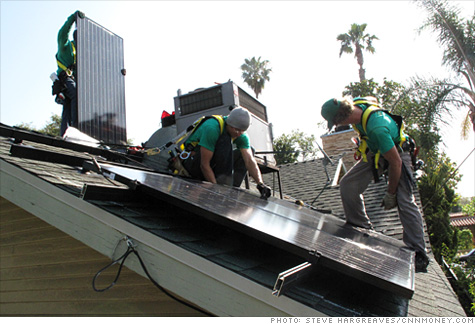 "I'd like to see America and the world become sustainable," said Morris, a transplant from Flint, Mich., who's been in L.A. just a little over four months. "Solar is the biggest difference I can make with what's on the market."

Morris is an installer for California-based SolarCity, one of a handful of companies pioneering an all-inclusive approach to solar, making it as easy and cheap for the consumer as possible.

Under the company's model, customers agree to a monthly lease and sign the rights to claim subsidies over to SolarCity.

In return, homeowners get a solar array installed on their roof, maintained for the life of the lease. They're hooked up to the electric grid, so when they need more power than the panels provide, there's no disruption. And SolarCity guarantees the panels will produce a set amount of power, which the company says should offset the electric bill and more than compensate for the monthly fee.

"Our goal is to get millions of homes to go solar, but the biggest barrier is the experience," said Lyndon Rive, the company's 33-year old CEO with major entrepreneurial connections. "Humans are lazy by nature. They want to do the right thing, but they don't want to jump through ten hoops to do it."

The challenge now facing SolarCity, and competitors like Akeena and Sunpower: Can these residential-mounted solar systems compete with the massive utility-scale solar arrays being built in the desert or the vast commercial solar systems being put atop big box stores nationwide? And can they do it competitively when the generous government subsidies expire?

The obstacles are no doubt huge, but Rive may just be the man for the job. He's a serial entrepreneur, having started his own cosmetics business in South Africa at the age of 17. He sold it five years later, moved to the U.S., and along with his brother started a multi-million dollar tech company.

The brothers are now in SolarCity together, along with their more famous entrepreneur cousin - PayPal co-founder and Tesla Motors CEO Elon Musk.

SolarCity is the type of company President Obama and other supporters of the new "green economy" love to highlight.

It's creating good jobs for construction workers hard-hit by the real estate bust. Solar City pays its installers $15 to $30 and hour, plus full benefits.

It's growing. Last year the company had 300 employees. Now it's up to 560, and plans to have 800 by the end of 2010. It operates in five states, and is eyeing expansion plans in at least three others.

In a working class suburb just south of Los Angeles, Wayne Holder is not the typical person one often conjures up when thinking of solar power.

Holder, 44-years old and an electrical engineer with the Los Angeles sanitation department, uses a lot of power.

Between him, his wife and their two kids Holder says the washer and dryer get a constant workout. Plus, the family has a salt water pool the requires the filter to run nearly non-stop.

The result was an electric bill that reached nearly $600 a month last year, said Holder.

That's when he decided to call SolarCity. Now, he says he pays about $300 a month to the utility, and another $180 to SolarCity, with no change in electricity use.

"It was a no-brainier," he said. "and the only thing I have to do is hose off the panels every once in a while."

Other customers do it more for the environment.

On a hillside overlooking nearly all of Los Angeles, Andrea Kreuzhage recently put down $1,000 to install a SolarCity system on her roof.

Kreuzhage, a 47-year old documentary film maker, is not a big user of power. Before her solar system, her monthly electric bill was about $50 a month. Her lease with SolarCity is $55, although her solar panels now actually produce more power than she uses. (Local law doesn't yet allow her to sell that power back to the utility, although people are working to change that.)

But for her, the extra $5 a month is well worth it.

"The idea is to walk the walk, to be active, to do more," she said. And besides, "I'd rather pay a green business instead of a huge utility."

If SolarCity's customers and employees seem happy with the arrangement, they owe one entity a big thanks: the government.

Thanks to a mix of federal, state and local incentives, some 50% of the costs of solar power are subsidized.

Many of those subsidies are set to expire in eight years. The solar industry thinks it can compete without them, but it's clear costs will have to come down.

"It's dependent on a lot of key breakthroughs and variables," said Bill Ong, a solar power analyst at the investment bank of Merriman Curhan Ford. "One can debate whether they are on track or not, but progress is being made."

As for solar power mounted on homes like SolarCity's model, known as "integrators" Ong said there is room for that type of power and larger commercial systems.

"It's a big market for multiple players," he said, "and the integrator has this niche."

But with so many challenges facing solar, and Rive's proven track record seemingly allowing him to get into any industry, why he'd pick one as risky as solar? For the potential.