Stocks: If you thought the 1st half was bad... 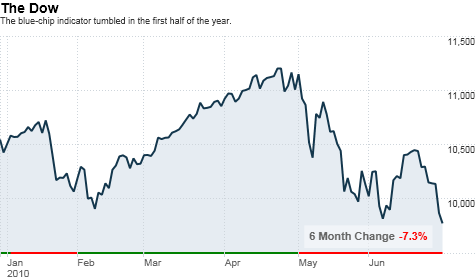 NEW YORK (CNNMoney.com) -- Stocks skidded in the first half of the year, particularly in the second quarter. But investors probably haven't seen the worst of it.

Welcome to the second half.

With the S&P 500 down more than 15% from the highs of late April and all three major indexes at more than 6-month lows, a bigger selloff could be brewing.

"By year-end we could be roughly where we are now, but between now and then, we could be substantially lower," said Karl Mills, president and chief investment officer at Jurika Mills & Keifer.

Going back to World War II, a decline of 15% off the highs has often turned a correction into a bear market -- a drop of 20% to 30% -- according to Standard & Poor's chief investment strategist Sam Stovall.

The Dow is down 7.6% year-to-date, with most of the losses coming in the past two months when the Dow lost more than 10% on worries that the European debt crisis and signs of slowing in Asia will send the U.S. economy back into recession.

"What we saw in May and June was investors trying to understand that it's going to be a tepid recovery at best," said Alan B. Lancz, president at Alan B. Lancz & Associates.

"We'll be selective buyers on the dips," he said. "But the weaning off the government stimulus, China slowing down, BP's oil spill and the sovereign debt issues are going to be an overhang for some time."

Fear of a double dip: Worries that debt-plagued European nations such as Greece and Spain will default on their borrowings were somewhat mitigated by European leaders establishing a nearly $1 trillion fund to provide support. But with governments struggling to implement cutbacks and the euro flailing near a four-year low, concerns remain in play.

"The European issues highlight the fact that fiscal deficits cannot run indefinitely and that we need to fix some of our long-term debt issues," said Ben Halliburton, chief investment officer and founder at Tradition Capital Management."

Congress' budget chief said Wednesday that the outlook is daunting considering the level of debt.

Recent reports showing that the housing market is slumping again and that job growth remains anemic have added to worries about the strength of any U.S. recovery.

Volatility: The last two months have also brought a return to the level of volatility seen at the height of the financial market crisis in 2008.

"I think we'll continue to see volatility, with a lot of it to the downside," said Ben Halliburton, chief investment officer and founder at Tradition Capital Management.

He said that between overly optimistic earnings forecasts getting trimmed and the reality of certain tax cuts expiring at the end of the year, the choppiness is unlikely to calm down.

Corporate earnings growth in question: Despite all the turmoil, analysts have barely cut earnings estimates for the second quarter and second half of 2010, and all of 2011, according to Thomson Reuters.

"Since mid-May, analysts have ratcheted their second-quarter estimates down modestly, but they seem to be taking a 'wait-and-see' approach for the next 18 months," said John Butters, Thomson's senior research analyst.

Earnings are expected to have risen 27.2% in the second quarter versus a year ago, down just slightly from mid-May estimates. Financial sector forecasts have come down the most -- which is fitting, since those forecasts were raised the most in late April, when the stock market was at its highs.

Analysts currently expect 2010 earnings to rise 34% from a year ago, the biggest year-over-year growth since Thomson began tracking the info in 1998.

"Either the market is overdoing the fears and there's room for stocks to rally, or the market is ahead of the analysts and the estimates need to come down," said Butters.

Stocks skidded in the first half of the year and especially the second quarter, but investors probably haven't seen the worst of it yet: welcome to the second half.
First Published: July 1, 2010: 7:31 AM ET