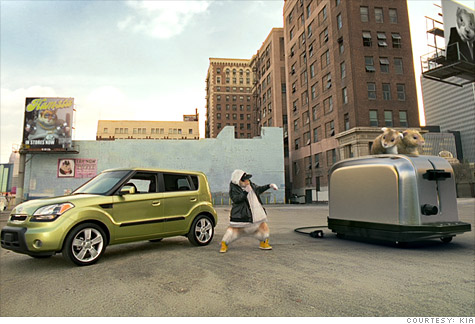 FORTUNE -- In the ad world, anything is still possible. Dancing hamsters can sell cheap cars.

That's what Kia Motors America has discovered with its popular "This or That" commercial, which features urban hamsters in hooded sweatshirts rapping about the Kia Soul. The ad, which owned space during the NBA finals, has also gone viral since it launched in late May. There's just something about blinged-out rodents dancing down "Hamsterdam Avenue" that makes you smile (see for yourself here).

But does it make you want to buy a Kia Soul? The car company is finding out that yes, the ads resonate with its target audience. Kia dealers have experienced a surge in sales of the model, and the company's growth overall is strong while many of its competitors continue to struggle.

The "This or That" spot isn't the hamsters' debut. Viewers and critics alike first fell in love with them in Kia's "A New Way to Roll" segment last year (watch the ad here). Nielsen named it the best automotive ad of the year in 2009, and it just picked up a 2010 Silver EFFIE award as the most effective ad in the David vs. Goliath category for smaller or up-and-coming brands.

The agency behind the Kia hamsters is -- perhaps not so coincidentally -- David & Goliath, a Los Angeles-based company that has handled the company's advertising for the last decade. The ads were born from what David Angelo, David & Goliath's chairman and chief creative officer, describes as "deep strategic research" into the target consumer of the Kia Soul: Gen Y.

Kia says it trusted David & Goliath to reach these consumers because of the agency's staff of "younger, Gen Y creatives." But Kia's marketing team may not have been fully prepared for that creativity when they first sat down to see the hamster video.

"The ad was actually presented first on Halloween in 2008, and the team came in wearing full costumes," recalls Michael Sprague, Kia Motors America's vice president for marketing. "They tried to be as serious as possible."

Colin Jeffery, executive creative director at David & Goliath, remembers it as a challenge. "It was actually very difficult to pitch such an important project dressed as Bjorn Borg," he says with a chuckle.

The spot they pitched became the 2009 hamster ad, "A New Way to Roll," which featured a rare concept for an advertisement -- constantly changing music tracks. According to Jeffery, this was the first time an advertisement had used a rotation of song tracks for the same spot, with a different song each night the ad appeared.

As for the hamsters, they were chosen as a "metaphor for sameness," Angelo explains. "They go around and around in a treadmill without any direction or reason for why they are doing it." The ad's Kia-driving hamsters portray an alternative to the tedium as they drive past envious fellow critters stuck in unmoving wheels.

Kia, which is based in Seoul, South Korea and is owned by Hyundai Group, has grown while most car companies have struggled in recent years. Its American division credits its current position to aggressive campaigning in 2009 when competitors cut back. In January, a traditionally weaker month for car advertising, Kia launched three new products and readied its first Super Bowl ad.

On the sales side, Kia is lucky it went with the furry option.

The greater New York City area shipped its last Soul on June 12, according to Riqui Buckley, a sales manager at Kia of the Bronx. "Demand has definitely exceeded expectations. To the best of my knowledge, this is the first time we've sold out," Buckley added, claiming that 80% of his fellow dealers nationwide have sold out of the Kia Soul.

With the Soul, Sprague believes Kia has started a "product transformation." He admits that in past years Kia was known more for its value than the quality of its cars.

While the hamster ads contributed to Kia's monster spring, Sprague admits that, "it's always in the back of my mind" that the viral wave may pass them eventually.

That's probably true, but Kia's hamsters should extend their 15 minutes of fame as long as they can, just as all good hip-hop stars do.

Behind the hype on Tesla

Got guts? What to expect from GM's IPO