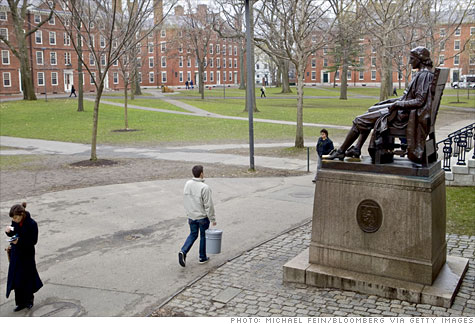 FORTUNE -- Every university has a story to illustrate how much poorer it's become in the last two years. Harvard stopped serving hot breakfasts. Yale turned down all the campus thermostats. Brandeis is even exploring loaning out its Warhols for a fee.

Penny-pinching continues to guide decision-making at many U.S. universities, and that's shining a spotlight on shrunken endowments, which lost an average of 18.7% in the fiscal year that ended in June 2009, according to a study by the National Association of College and University Business Officers and Commonfund. Results for the 2010 fiscal year will be reported in the coming months.

Endowments were criticized for being too large five years ago, but the losses suffered during the financial crisis have led many faculty members, alumni, and students to question whether the investing model they follow is broken. A recent report by the Tellus Institute and Center for Social Philanthropy boldly stated that "the aftermath of the financial crisis clearly calls for a transformation of the Endowment Model of Investing." Moody's issued a report on June 14 in similarly solemn tones, criticizing liquidity management and concluding that a "structural deficiency" exists when it comes to board oversight.

The model in question, commonly called the Yale model, is predicated on the idea that an endowment, which supports a significant portion of costs for most universities, is a long-term fund and should therefore structure its portfolio to maximize future gains. It should take on risk with investments in alternative assets such as private equity and hedge funds, and hopefully earn a large premium from it. Even if markets take a dip, the thinking goes, endowments can hold onto illiquid assets and ride out the storm until asset valuations rise again.

The recent financial bloodbath exposed holes in this theory. When financial commitments came due in late 2008, many endowments, with their funds tied up in illiquid investments, were unable to get cash. They had underestimated the downside risk of the model and spent too much too quickly. The University of Pennsylvania, one of the best-performing endowments during the crisis, lost only 16.8% in fiscal 2009 -- about half of what Harvard and Yale did -- precisely because the fund followed a more value-driven approach to investing and had more than half of its assets in stocks and treasuries.

Ignoring the critics, piling on risk

Every endowment has its own strategy based on the needs of its university. But interestingly, very few managers, whether they're from large or small funds, seem to be changing course. "Our strategy hasn't changed much," says Fred Rogers, vice president and treasurer of Carleton College, who oversees a $570 million endowment. "The main problem with our portfolio is that entire market went down."

Other managers echo his sentiment, that the market rises and falls, and that the ability to generate returns in excess of inflation requires a certain amount of risk. "What's interesting is that most endowments still have targets for alternative assets higher than before," notes Laurance Hoagland, president of the Hewlett Foundation, who previously oversaw Stanford's multi-billion dollar endowment.

It helps validate risk-taking, of course, when markets are up, and they have had a stellar ride of late. The Dow is still up nearly 50% from its March 2009 lows.

Today, managers again boast strong returns. They're also talking about buying assets and looking for investments in sectors like real estate, which some consider to be attractively valued. Nor should it go unmentioned that Harvard enjoyed 8.9% returns over the last decade, including during the financial crisis.

So perhaps the long-term endowment model is working after all, and investors and alumni alike must steel themselves to market turbulence.

But there are also real lessons to be learned from the crisis. The biggest, it seems, is that endowments must heed other considerations besides asset allocation across markets. Namely, liquidity risk and leverage risk cannot be ignored.

Universities are taking note. To protect themselves, many institutions are now stress-testing their portfolio to figure out the appropriate level of liquidity needed in case of another market upheaval. "We've enhanced our liquidity policy and put a limit on how many unfunded commitments we can have," says Bruce Zimmerman, who oversees University of Texas's $12 billion endowment.

Focus on the long-term

Part of the challenge is valuing an endowment's portfolio in the first place. Endowments, like universities, are notoriously competitive with one another, and it's easy to get caught up in a contest of short-term returns. On an industry basis, most endowments value assets over three years, which can lead to a chase for short-term gains, not long-term value.

"We tend to get very hung up on this valuation question, when, over a long-period, all that matters is cash returns," says Verne Sedlacek, president of Commonfund, a nonprofit organization that manages university investments. Part of the challenge now, he says, is to calibrate incentives for long-term growth.

All this is well and good. To be fair, universities have every right to look long-term to try to build their pool of capital. But there may also be additional bloodletting to come, given the massive deleveraging underway in advanced economies. And although the Dodd-Frank legislation doesn't directly affect university endowments, financial regulation may affect the derivative exposure in portfolios, because funds will need to post more collateral for certain contracts.

Given the ups and downs inherent in this strategy, students and faculty should probably prepare for the indignities that will be suffered during further bouts of market turbulence. Cold lunch, anyone?

Correction: An earlier version of this story incorrectly stated that Brandeis sold its Warhols. In fact, is is exploring ways to loan out its art collection, including works by Warhol, for a fee.

Calpers and risk: Together forever?