California to workers: It's minimum wage for you 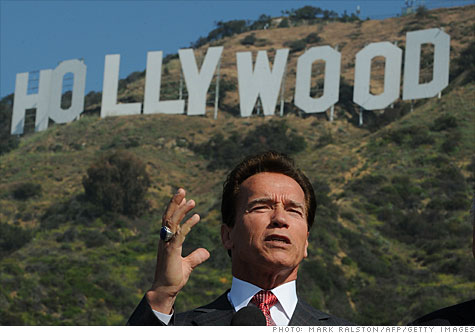 NEW YORK (CNNMoney.com) -- A year ago, California dealt with its budget crisis by handing out hundreds of thousands of IOUs to contractors and taxpayers. This year, it's threatening to cut state workers' wages to the bone.

Most of California's 240,000 state employees could see their salaries temporarily cut to the federal minimum wage because government officials can't reach agreement on a new fiscal-year budget for the financially troubled state.

It's the latest manifestation of state budget dysfunction, and workers have found themselves caught in the crossfire as the state's Republican governor, Arnold Schwarzenegger, tussles with the Democrat-led legislature.

With no end in sight to the impasse, Schwarzenegger's administration last week moved to to cut 200,000 state workers' wages to $7.25 an hour unless a budget is reached soon.

The salary reductions would cut across all job types and pay scales -- from a lifeguard who makes $16 an hour to an accountant who nets $6,000 a month. The average California state worker's salary was $65,484 last year.

Affected workers would receive back pay when the budget is passed. But state employees have already gotten the short end of the stick. Some have been forced to accept furloughs that have decreased their salaries by an average of 14%.

To help close the $19.1 billion budget shortfall for the fiscal year that began July 1, Republican lawmakers have proposed severe cuts to state social services such as welfare and Medicare, instead of hiking taxes.

By contrast, Democrats oppose the program cuts and instead want tax increases on industries like oil production. They have also proposed a delay to some corporate tax breaks.

Workers will at least receive minimum wage thanks to a 2003 California Supreme Court ruling, which said the state can withhold salaries during budget impasses as long as it complies with federal law. (Read 'Stimulus: The big bang is over.')

Controller sues over cuts: State Controller John Chiang has refused to carry out the cuts, saying he would wait until he completes an appeal of another court's ruling on a similar pay cut order from 2008.

Schwarzenegger's office sued Chiang on Tuesday, seeking an injunction to force him to make the cuts. Chiang promptly filed a cross-complaint alleging the order violates federal and state law.

"Withholding pay from state employees until a budget is enacted does nothing to solve the budget deficit, but will only make it worse," Chiang's office said in a separate statement. Chiang has also said the payroll computers aren't equipped to make the pay cuts.

A spokesman for Schwarzenegger said that an appellate court ruling on Friday upheld a trial court's decision that Chiang must enact the cuts. "That's the law here, and despite several courts' rulings, he's still going to defy the law," the spokesman said.

The Service Employees International Union, the largest union of California state workers, said in a statement that the cuts will only add to the state's budget crisis. The union claimed that it negotiated an agreement last year that would have saved the state some money, "but the governor walked away from that deal."