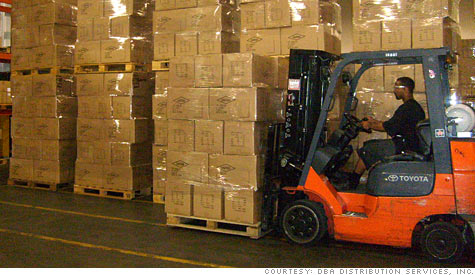 Michael Terry of Los Angeles is working at DBA Logistics because of a jobs program funded by the Recovery Act. By Tami Luhby, senior writerJuly 9, 2010: 8:21 AM ET

NEW YORK (CNNMoney.com) -- There's at least one stimulus program that's creating jobs and winning praise from both sides of the political aisle.

A little-known Recovery Act initiative is expected to put more than 200,000 unemployed people back to work in 32 states and the District of Columbia. It's called the Temporary Assistance for Needy Families Emergency Fund, and it subsidizes jobs with private companies, nonprofits and government agencies.

But the $5 billion it receives runs out on Sept. 30, even though employers and state officials administering the money say there's lots more demand out there.

"It would be such a shame," said Jan Vogel, executive director of a Los Angeles area agency that has placed more than 10,000 workers. "How much more productive can a program be than putting people to work?"

Congress is considering a year-long extension that would add $2.5 billion. But the proposal is bogged down in political wrangling over the nation's exploding deficit.

While the Obama administration's $787 billion stimulus program has become a popular target for GOP attacks, the subsidized jobs initiative has been adopted by Republican and Democratic governors and policy analysts alike.

"It's a pretty cost-effective way to create jobs," said Kevin Hassett, director of economic policy studies at the American Enterprise Institute, a business-oriented group that promotes free enterprise. "We should be creative about seeking ways to get people connected to the workforce again."

Even Haley Barbour, the Mississippi governor who headed the Republican National Committee in the mid-1990s, had high praise for the effort.

The "program will provide much-needed aid during this recession by enabling businesses to hire new workers, thus enhancing the economic engines of our local communities," Barbour said when the initiative launched last year. (Read 'Stimulus: The big bang is over')

The Temporary Assistance for Needy Families program, known as TANF, was created as part of the 1996 welfare reform effort.

States, which received $16.5 billion in federal TANF funds last year, have a lot of flexibility on how to distribute the money to help low-income households with children.

The Recovery Act injected another $5 billion into the program and created an emergency fund. States have used about half the stimulus money to provide cash grants, food programs, housing assistance and other aid.

But the fastest-growing segment of the emergency fund is the subsidized jobs program. States have already put $615 million to work, according to the Center for Law and Social Policy, an advocacy group known as CLASP. It expects states to fund a total of 200,000 jobs before the program expires.

"This provides a low-risk way for employers to hire," said Elizabeth Lower-Basch, senior policy analyst at CLASP. "Employers will do their best to keep people."

Putting the unemployed to work

Around the country, companies have signed up for a wide range of reasons. Some are eager to expand, but others see it as a way to dip their toe back into hiring.

DBA Logistics, a freight forwarding company based in Hawthorne, Calif., took 32 previously unemployed people to work in its warehouse and in other departments. It receives a subsidy of $10 an hour per employee.

The program has allowed DBA to broaden its hiring base. The company plans to keep most of the new employees even after the subsidy runs out.

"It gives us access to a new pool of labor that we otherwise wouldn't have," said Duke Dukesherer, the firm's executive vice president for the Americas. "They are good workers."

The workers are thankful to have a job. After hitting the unemployment line six months ago, Michael Terry now loads and unloads trucks, drives a forklift and stacks boxes for DBA.

"I'm financially stable right now," said Terry, a Los Angeles resident who has two toddlers and another baby on the way. "I can pay my bills."

Dorothy Polite, meanwhile, saw the stimulus program as a way to expand her one-woman enterprise, which focuses on speech therapy and training in the Los Angeles area. She brought on two workers to answer the phone, schedule appointments and organize her files -- all tasks she used to do herself.

Instead, Polite has focused on getting more certifications and lining up more contracts with agencies.

"It gave me more time to generate more business," said Polite, who is looking to hire both workers permanently.

In Louisville, Miss., Taylor Machine Works used the subsidy to rehire 13 people it had laid off. The forklift truck manufacturer has seen business pick up lately and needs more welders, machinists, painters and assemblymen.

Mississippi provides six months of subsidies, paying 100% of salaries for two months and then gradually reducing the assistance to 25% by the sixth month. The program has proven very popular with employers, who have kept all but 3% to 4% of the participants, said Stan McMorris, deputy executive director of the state's Department of Employment Security.

Taylor intends to hire more people if it can before the program ends on Sept. 30.

"This money has helped us bring them back to work sooner," said Inez Blumenfeld, employment supervisor. "We don't intend to lay them off again."