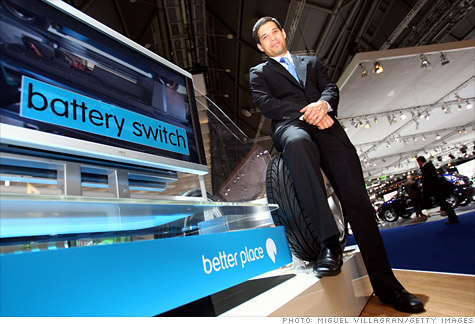 FORTUNE -- Shai Agassi wants to put the world into electric cars whose batteries can be swapped out at one of his futuristic "gas" stations. But just as the cells in flashlights and laptops need lithium to run, so do -- swappable batteries or not -- electric cars. And some are now saying that will make lithium, in our increasingly battery-dependent society, increasingly hard to come by.

There are rumblings in the press that the auto industry switching from petroleum to lithium is simply shifting from one finite resource to another, and even that the U.S.'s real reasons for invading Afghanistan were to secure its massive deposits of the alkali metal. Also, electric skeptics think there might be trouble accessing enough lithium to fuel the shift. Agassi, unsurprisingly, is not among them.

"That was one of the biggest myths perpetuated by the oil guys," says Agassi, the founder and CEO of a company called Better Place, which is positioning itself as the architect of the network needed to support swappable battery cars and all the attendant infrastructure.

According to the latest numbers from the United States Geological Survey (USGS), current producers are providing enough lithium to fuel the projected number of electric vehicles for the next ten years. After that, the major factor that will drive competition between players in the energy industry might not be mining lithium, but recycling it.

It doesn't make sense, financially, to recycle lithium now. Producers are mining way too much of it for the demand. Lithium isn't currently used for car batteries in any significant way -- it's used for batteries in laptops, cell phones and cordless tools. All of these products took a hit during the recession, which meant a surplus of lithium existed in 2009, along with a fall in price. The only way the demand for lithium will surge is if electric vehicles roll out successfully in massive enough numbers to require a significant increase in manufacturing of lithium-ion batteries.

Agassi wants to be the man behind that surge. His company, Better Place, is based on the principle that manufacturers don't need to wait for battery technology to improve to roll out consumer-grade electric cars. Instead, Agassi hopes to build networks of switching stations where drivers can change used batteries for fresh ones much like they fill up at gas stations now.

Agassi has started to introduce the project in contained environments. Better Place has partnered with car companies Renault in France and Chery in China to build vehicles. In Tokyo this year, Better Place built a battery swapping station and deployed four electric taxis to demo that the system works. Israel should have a fully operative system by next year, says Agassi, who signed a deal with Renault to build 100,000 electric cars for Israel and Denmark between 2011 and 2015. He's also planning to build networks in Australia and Hawaii.

He's aiming high, and plenty of factors stand in the way of creating an automobile fuel infrastructure in a decade when the petroleum system took a century to create. However, it looks like lithium isn't one of the limiting factors.

As of 2009, the U.S. had 2.5 million tons of lithium in reserve, and there were an estimated 23 million tons in other countries. Lithium-ion batteries for cars only need under 15 kilograms of the element per battery pack by a conservative estimate.

"Producers right now will keep up with capacity in terms of the demand of the lithium," says Brian Jaskula, lithium commodity specialist with the USGS. He adds that producers are only at 60% right now, and if demand does increase, they've got plans in place to expand.

Reports of large lithium reserves in Bolivia and Afghanistan have caused a stir in the media -- the idea being that there could be a resource grab for lithium in both countries. But foreign miners are unlikely to take the element from either place. Bolivian president Evo Morales won't sell Bolivian lithium, and Afghanistan is still too dangerous. But forecasted issues in these countries are based on the assumption that lithium will follow a similar pattern as another finite energy resource -- oil.

First of all, it isn't in high enough demand to be as valuable yet. Potential controversies about the lithium reserves in Bolivia and Afghanistan depend on lithium becoming a hot commodity. But if the electric car industry takes off, people won't need to tap into new sources of lithium for about ten years, says Jaskula. That's assuming that the technology doesn't improve to make Lithium-ion batteries more efficient. Agassi thinks it will.

"Every five years, you need half as much lithium to create the same battery," a pattern of advancement that echoes Moore's Law for transistors. "But if you stayed on the same technology," Agassi says, "we'd [still] have three billion batteries. That's about two centuries of cars even with growth, so lithium is not the problem."

Lithium doesn't combust like oil either. Because it doesn't chemically change while it provides energy, it can be recycled. Only one company recycles lithium now, since saving it is more expensive than mining. The company is called Toxco, and it received a $9.5 million grant from the Department of Energy in 2009 to boost its lithium recycling abilities. More players will step on the scene, says Jaskula, if electric vehicles take off. Then it will make economic sense to recycle car batteries not only for lithium but also for other more valuable materials, like cobalt.

This could mean that the people who will hold the power in the lithium industry of the future will be the companies with the best recycling technology. According to a report by the Argonne National Laboratory in Chicago, virgin lithium won't dominate the market in 2040, by which time this technology should be cheap. When electric vehicles roll out, the race to recycle better will likely be on.

Of course, there's a risk in racing to ramp up recycling capabilities now, says Jaskula. That technology is only valuable if electric vehicles do well and scientists don't find a better metal for batteries in the next 30-40 years. It's going to be tough to predict what actually happens next.