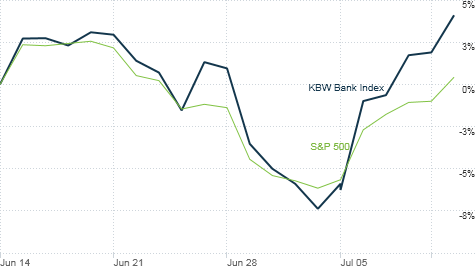 The KBW Bank Index, a closely-watched gauge of the banking sector, has outperformed the S&P 500 recently, underscoring investors' optimism about earnings. By David Ellis, staff writerJuly 14, 2010: 4:27 AM ET

NEW YORK (CNNMoney.com) -- For the nation's top banks, their latest results may be more about their ability to deliver answers rather than actual profits.

Big banks are all expected to finish comfortably in the black when they start reporting their second-quarter numbers later this week.

But with so many questions about forthcoming regulatory reform as well as the fate of the economic recovery, it will take a lot more than better-than-expected earnings to satisfy investors.

Wall Street has had a difficult time trying to handicap how well banks did in the quarter.

For starters, the industry has been hit with a number of recent changes, including a new series of rules put in place earlier this year by the Federal Reserve on overdraft protection and credit cards.

Adding to the confusion, many banks are expected to take an accounting gain this quarter as a result of the declining value of their debt.

Wall Street reform and the price of milk

Sovereign debt troubles in Europe, as well as a bonus tax levied on bankers earlier this year by the British government -- which will impact the U.K.-based operations of big U.S. banks -- also threaten to weigh on banks' results.

What does seem certain however, is that the second-quarter numbers may not appear as strong as they did during the first three months of the year.

Unlike last quarter, banks are not expected to produce flawless trading results due to the wild swings in the market. Four of Wall Street's largest banks, including JPMorgan, Goldman Sachs, Bank of America and Citigroup, managed to make money from their trading desks in every one of the 64 business days during the first quarter.

It hasn't helped either that the investment banking business has also been pretty lackluster. Overall revenue from stock and debt activity fell 24% to $7.9 billion in the second quarter from $10.4 billion in the previous quarter, according to research firm Dealogic.

One potential bright spot in all this, however, is the issue of credit. Loan troubles, which once seemed overwhelming for consumer-focused banks, have shown signs of moderating.

Early-stage credit card delinquencies have steadily declined between April and June, leaving big issuers like Bank of America in a position to possibly draw down some of the vast amounts of cash they have stockpiled for future losses.

"[Credit] is probably the area where we've had some nice recovery," said Bill Fitzpatrick of Optique Capital Management, which manages about $800 million in assets, including shares of many top banks.

Many analysts also anticipate there will be signs of stabilization in the mortgage portfolios of big banks -- although some warn that any improvement could prove temporary.

Since the expiration of the homebuyer tax credit in April, conditions have deteriorated within the residential real estate market.

Earlier this month, pending home sales plunged by a staggering 30%, according to the National Association of Realtors. At the same time, prices within some of the biggest housing markets have barely budged from their historic lows, based on industry data.

With big banks in such a state of flux, experts suggest that investors will be carefully parsing what top bank CEOs have to say, such as Citigroup chief Vikram Pandit or JPMorgan's famously outspoken CEO Jamie Dimon.

If Wall Street detects even the slightest whiff of confidence, that could spark a rally among bank stocks. Continued cautiousness by executives, on the other hand, could keep traders on the defensive.

"There is no way to say 'Just trust us," said Ed Najarian, senior managing director of bank research at ISI Group.

Finally, there's the issue of financial reform. Analysts and investors are likely to focus even more on just how much the proposed new rules for the financial industry will squeeze bank profits going forward.

That also appears to be a question without any easy answers. For one, the bill has yet to pass the Senate and reach President Obama's desk. What's more, experts said any legislation will merely serve as a guide for federal regulators who need to draft actual rules for the industry.

Investors, as a result, are unlikely to get any insights into what exactly this will mean for banks' debit card business, trading operations and other units affected by reform.

"Financial reform is coming to a close," FBR Capital Markets analyst Paul Miller said in a recent note to clients. "Clarity is not."

Too big to fail? How would we know?