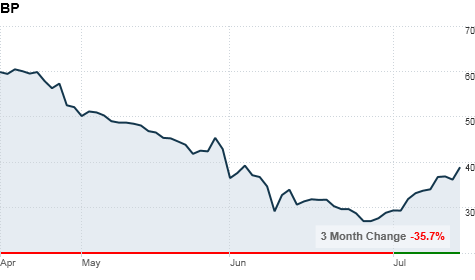 NEW YORK (CNNMoney.com) -- BP's stock jumped Thursday after the energy company temporarily stopped the flow of oil from a ruptured well in the Gulf of Mexico for the first time since April.

BP has been conducting a "well integrity test" as part of an ongoing effort to install a new capping stack on the well. The goal of the test is to measure the pressure inside the well bore.

The company said earlier Thursday that the flow of oil could stop during the test, but warned that a pause may not mean the well has been permanently capped.

BP has said that the test could take up to 48 hours.

Doug Suttles, BP's chief operating officer, said at a press conference that stopping the flow was "an encouraging sign" but he cautioned that "now is not the time to celebrate."

'"We have to be very cautious through this 48-hour period and not jump to the conclusion that the flow won't have to resume," Suttles told reporters.

After putting the capping stack in place over the weekend, BP began slowly closing valves on the device earlier Thursday.

BP said it will review the pressure readings with the relevant government agencies, including the federal science team, to determine next steps.

While the test is being conducted, BP has temporarily stopped drilling two relief wells as a precaution. The relief wells, which are expected to be done in August, are the sole means to permanently kill the well.

The well, located off the coast of Louisiana, began leaking oil in April after a drill rig operated by BP exploded and sank, killing 11 workers and injuring more. The ensuing disaster has devastated the Gulf Coast ecosystem and hurt the region's economy.

BP has pledged to pay all costs related to cleaning up the spill and has set aside $20 billion to cover liability payments.

Despite the rally on Thursday, shares of the London-based oil giant are still down 35% since the April 20 explosion on the Deepwater Horizon drill rig.

But the stock has regained some of the lost ground. After closing at a low of $27.02 on June 25, shares have risen steadily amid speculation that BP will be able to recover from the disaster.

Meet one company that loves BP