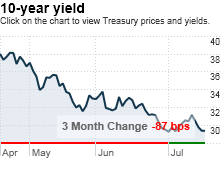 Treasurys posted a weekly gain last week as a slew of disappointing economic reports caused investors to worry about the U.S. economic outlook.

What's moving the market: Safe-haven Treasurys fell Monday as investors turned to riskier assets, but they pared some losses later in the morning as stocks seesawed.

With about 122 companies due to release second-quarter earnings results this week, investors have been on edge, and bonds have moved inversely to the stock market's swings.

Because Treasurys are backed by the U.S. government, they are viewed as low-risk investments and are attractive during times of economic uncertainty.

"The economic calendar is fairly light, so the bond market is likely to take direction from the stock market," said Bill Larkin, portfolio manager at Cabot Money Management. "It should be a slow summer week outside of the hot economic data points, which are reports on housing."

The government is scheduled to release reports on building permits and housing starts on Tuesday, while a report on existing home sales from the National Association of Realtors is due later in the week. Investors will be eyeing these reports for clues about the health of the U.S. economy.

What analysts are saying: As volatility in the market persists, Treasurys have been steadily heading higher. But these gains can't last, said Larkin.

"We've got money pouring into the bond market at rates I haven't seen in my 22-year career," said Larkin. "So this is bound to turn around."

As the economy shows signs of gradual improvement and investors eventually gain confidence, prices will begin to fall, he said.

"We've gone through a burst of bad news, and people are very negative right now," said Larkin. "But my guess is that by the time the second half of the year is over, people will be surprised by economic strength."