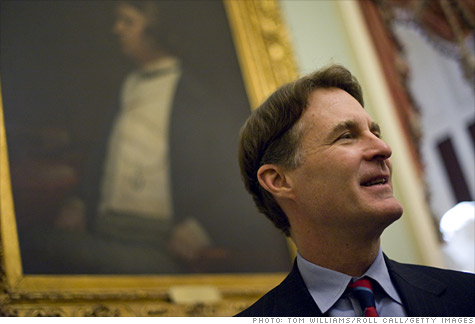 FORTUNE -- Earlier this year, Senator Evan Bayh of Indiana stunned Democrats when he announced that he wouldn't seek reelection in November, making it likelier for his party's command of the Senate to fade come fall.

To many, it was an unexpected move for the two-term senator who grew up watching his father, former Senator Birch Bayh, represent Indiana. The younger Bayh says he grew disillusioned with Congress. "There is much too much partisanship and not enough progress," he said in his February announcement.

Last week, President Obama signed the most ambitious legislation in generations overhauling the country's financial regulations. Bayh, who serves as chairman of the banking subcommittee on security and international trade and finance, says there was progress made. He was one of 60 senators to pass the Dodd-Frank bill after more than a year of wrangling over how to rein in the reckless behavior that nearly destroyed the nation's financial system.

The legislation lays out several measures, including: creating a 10-member council of regulators to monitor threats of the financial system; establishing an independent office to oversee services such as mortgages, credit cards and short-term loans; requiring big banks to have a cash reserve to protect against future losses; and forcing derivative trades to be more transparent.

But Bayh stopped short of calling the new law a full-on success. There's still a lot of unfinished business, he says. And the law's mark in history will largely depend on how financial regulators apply the new rules. Fortune caught up with Bayh to get his thoughts on the new law as the government's focus shifts to the monumental task of implementing it. Here's an edited transcript.

You had some hesitations about the bill just days before it went for a Senate vote. What were they, and what finally made you cast a yes vote?

My major concern was that it could increase the cost of credit. I was also concerned about the level of uncertainty of the legislation with so many issues still to be resolved by regulators at a time when we're hoping financial institutions would resume lending, particularly to credit-worthy small businesses and investments in capital expenditures. The additional uncertainty that financial institutions face will make them more hesitant to make funds available for those kinds of activities.

But it made more sense to try and provide additional stability, transparency -- and most important of all -- protect taxpayers so that these institutions no longer become so big that they have to be bailed out by the public if they get into trouble.

The bill was far from perfect. But I felt we had to try something understanding that in all likelihood there were going to be many things that have to be improved upon, corrected or even perhaps deleted as we go forward when we finally see how they're working.

Do you think the new law will prevent future financial crisis?

I think it makes it less likely, but it's not going to prevent the reoccurrence of financial instability from time to time. No reform in the history of financial markets has ever accomplished that.

My biggest concern is that we continue to see an imbalance in consumption and savings in the global economy. Some economies -- most notably China, Germany and some other parts of the developing world -- are growing very rapidly, saving large amounts of money, and basing their economies on exports.

The United States and a few other countries continue to consume more than we produce. So we run a fairly sizeable current account imbalance. My point is that as long as you have these imbalances that are unsustainable, they're going to manifest themselves in some way. It was a tech bubble back around 2000 that burst. It was a real estate bubble that burst in 2007 or 2008. We now are looking at sovereign debt problems. When you have large disequilibrium something bad is going to happen unless you move to correct them.

There were a whole lot of things that went into this crisis. And I was one person who did vote to include reforming mortgage finance companies Fannie Mae and Freddie Mac as a part of this. I was in the small minority in my political party, but I thought they played a role. They should have been included in the legislation, but they weren't. It's something that still needs to be done.

When Lehman Brothers went down, which was the domino that threatened to tip over all the other dominos in the economy, one of the problems was that there was no mechanism for the government to step in and seize that entity. The new law includes a systemic risk council, where the government will monitor the level of risk that's being run by some of these institutions. If they threaten to get so big and take on such levels of risk that it threatens the national or global economy, the government is in a position to do something about that.

And if they begin to fail, the government now has resolution authority where it could step in and have an orderly unwinding of a business like Lehman Brothers rather than a chaotic one or one that takes place over years. So there are mechanisms in here that help deal with the kind of panic that we went through. Will it prevent all future panics? I don't think that has ever been possible. We're not clairvoyant.

What kind of message do you think this legislation sends to Wall Street and what's your take on the response so far?

It sends a number of messages. The hope here was to make the financial markets more stable while minimizing the increased costs to both industry -- and ultimately to the consumer. Now some people in the financial markets would argue that this is going to be too costly, which would ultimately end up harming consumers. I think we've got to keep a careful eye on that and ensure that if some of these steps have gone too far and have proven too costly that perhaps they can be revisited. I think it's important that we keep an open mind on that.

Could the law impede economic growth?

If it's not enforced in the right way it does. Remember, I'd say that 75% to 80% of this law is yet to be determined. The regulators are going to be deciding what to do. We don't want financial institutions to go back to reckless lending not based on sound fundamentals. But we do want them to lend to credit-worthy businesses and individuals. That's important to economic growth.

If we have made the financial institutions much less profitable that they no longer have as much money to lend, or they're going to be so gun shy that they don't even lend to even very credit-worthy customers, then that would impact economic growth. That's something that will need to be corrected if that happens.

Some criticize that the new law puts too much authority in the hands of regulators. Do you agree?

I think that's a real risk and a legitimate criticism. The alternative though is to have a bunch of politicians writing the rules with great specificity. These are people are well intended but they're not very familiar with these very complex issues. So I think that would have been a worst alternative. We could also do nothing, which given the panic we've been through is also not a very satisfactory alternative. So what I think we have to do here is be very vigilant on the regulators. If they start making ill-advised decisions, then that's why we have elected officials to step in and say, 'Wait a minute, that's not what we meant.' Or to be honest and say, 'To be honest we thought this was going to work well, but it didn't and now some parts need to be substantially corrected.'

As far as protecting consumers and ensuring economic stability, what part or parts of the new law will have the most teeth?

The Consumer Financial Protection Bureau will have real enforcement powers over consumer lending. So that has great potential to safeguard consumers. It also has the potential for abuse if that bureau goes too far. So I think whoever is head of that department is going to need to be a very practical person with hands-on experience who understands the real world consequences of some of the decisions that they're making.

Besides failure to address Freddie and Fannie, is there anything else the law overlooks?

Yes. Take derivatives trading for example. We can do whatever we want regarding derivatives in this country, but if most other major economies don't have the same standards, the activity is still going to take place, it's just going to go some place else. So the risks will still be run. It's just the jobs and the capital will no longer be here in our country. So you've got to watch out for some of those unintended consequences.

The Basel Committee on Banking Supervision meeting is coming up. It will begin to set up capital and liquidity standards for all major global financial institutions. That may be every bit as important, even more so than this piece of legislation. The amount of capital held by these banks and the liquidity that they maintain are going to be very important for global financial stability.

You've mentioned that too much partisanship has led you to fall out of love with Congress. With passage of the new law, do you think differently? Do you think Congress has accomplished something memorable in history?

As far as accomplishing something of great magnitude, I would say yes. Memorable -- probably. Whether it's remembered favorably or negatively remains to be seen. We have to wait and see how it works. This process was much too partisan. In my view, excessively ideological in some respects. The most extreme ideological notions were trimmed back some. I think there was opportunity to have more cooperation, and it's just another manifestation of how divided Congress is.

Wall Street reform: On to Obama

Bank reform: Fake it 'til you make it