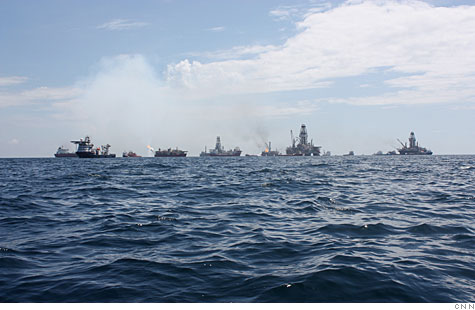 Drill ships and other vessels try to cap BP's blown well earlier this month in the Gulf of Mexico. Many say the disaster was at least partly caused by a failure in government oversight. By Steve Hargreaves, senior writerJuly 26, 2010: 12:39 PM ET

Even before the BP disaster, the agency that oversees offshore drilling was already entangled in a sex, drugs and rubber-stamping scandal.

Now the agency is up for a complete overhaul.

The Minerals Management Service (MMS) has been renamed the Bureau of Ocean Energy Management, Regulation and Enforcement by the Obama administration.

Plans are to split the agency up into three separate divisions, all under the Department of Interior. The idea is to remove an apparent conflict of interest - charging one agency with both ensuring safety and maximizing oil revenues for the federal government.

But the plan is drawing fire from nearly everyone involved.

Environmentalists say the reforms don't go far enough. Offshore drillers say they are not being consulted. Congress says information has been slow in coming. And Government watchdogs say they lack transparency.

Environmentalists: Their biggest complaint is that there will be little change because the agencies will be largely run by the same people.

MMS was formed by executive order in 1982 under the Reagan administration.

Reagan carved out the MMS over frustrations with other federal departments in charge of offshore drilling at the time - namely, they were too slow issuing drilling permits, said Kieran Suckling, head of the Center for Biological Diversity.

The problem, according to Suckling, is that even under the reorganization, the new agency is still only tasked with facilitating energy development. He'd like the agency to be also tasked with improving the environment.

The agency could be given a dual mission, say, permitting offshore oil drilling and ensuring healthy fish stocks.

Otherwise, they are simply focused on energy and "as such, will continue to fall prey to cutting corners and influence by the industry," he said.

He also wants the directors of each new branch to be confirmed by Congress, adding an additional layer of oversight.

Drillers: They say problems at the old MMS have been exaggerated. But now that reforms are coming, they say they have not been consulted on decisions that will impact their industry the most.

They're nervous that, like the drilling moratorium, this lack of communication will lead to delays in getting drilling permits and put people out of work.

"Because no one consulted with industry on [the drilling ban], I don't think anyone knew what they were doing," said Randy Stilley, chief executive at Seahawk Drilling, a Houston-based firm. "There's a lot of confusion at the Bureau today."

Congress: Lawmakers were frustrated that Interior Secretary Ken Salazar took so long to send them a reorganization plan.

That plan has since arrived, and one staffer on the House Committee on Oversight and Government Reform said it covered many of the issues raised by lawmakers.

Still, the staffer said there are "many questions" unanswered, and that Obama's plan to keep all three new divisions within the Interior Department may be problematic.

There even seems to be some support for a stand-alone agency, similar to what Suckling is proposing.

"I personally would not like to see it broken into three smaller parts, but rather its own independent agency, one that's more similar to the EPA," Rep. Darrel Issa, R-Calif., said during a hearing on the reorganization Thursday by the oversight committee.

Despite talk from the administration praising the Internet as a great new tool to foster open government, they say there's been little effort to post offshore drilling documents online.

John Wonderlich, policy director at the Sunlight Foundation, cited Obama's recent example of problems at the old MMS - the one where MMS inspectors let industry fill out inspection forms in pencil, later completed in pen by agency employees.

"Why do we have to trust this story," said Wonderlich. "Why can't we see those forms online?"

He called for all sorts of oil industry documents - including well plans, safety inspections, and emergency response scenarios - be posted online, not just available on paper at a regional office. So far, he said that doesn't seem to be happening.

"This reorganization treats transparency as an after-thought," he said.

When asked to respond to all these concerns, a spokeswoman for the Interior Department pointed to a statement Salazar released along with an outline of the reorganization plans.

The "reorganization is not the sole means of addressing the problems," read the statement. "But it is an essential element of a broader program."

The shakeup isn't set to be complete until at least early 2012. Judging from the list of concerns, the administration may need all that time, and then some.